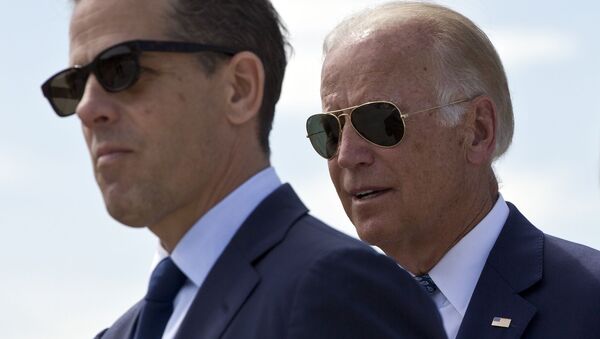 © AP Photo / Visar Kryeziu
Subscribe
The incident wasn’t the first time Biden has been asked to address the activities of his son in Ukraine. Last week in Iowa, the candidate appeared to fat-shame a man, calling him “a damn liar,” and saying “no one has ever said” that Hunter's appointment had anything to do with “selling access” to President Obama, as the man appeared to suggest.

2020 Democratic presidential hopeful Joe Biden’s stump speech at a campaign rally in San Antonio, Texas was interrupted Friday after a heckler accused the candidate of hypocrisy while talking about President Trump’s “corruption.”

“America can overcome four years of Donald Trump’s chaos and corruption, but if [he is] reelected it will forever fundamentally change the character of who we are as a nation,” Biden said, speaking to a group of supporters. “We can’t let this happen. This election is about the soul of our nation and Donald Trump has poisoned our soul.”

Going on to accuse Trump of racism against Mexicans, Biden was interrupted midsentence, with a heckler accusing him of “lying,” and asking “What about corruption in Ukraine?” The crowd erupted in cheering, shouting “We want Joe!” and demanding the heckler “go away!”

As the man was shouted down, Biden quipped “This man represents Donald Trump very well, claiming there’s an invasion of America!”

Later in his speech, Biden accused Trump of “telling lies” about him “because he wants to pick who the nominee is. I wonder why he doesn’t want me to be the nominee?” Biden asked. “Folks, with your help, I’ll beat him and beat him like a drum!” he said.

On Friday, the US House Judiciary Committee formally recommended impeaching President Trump, paving the way for a vote in the House of Representatives on the matter next week. Trump is accused of abusing his power as president to try to force Ukraine to investigate Biden, his potential political rival, and of obstructing Congress’s investigation into the affair.

The Democratic-led House of Representatives initiated an impeachment inquiry into Trump’s actions in September after a whistleblower accused the president of attempting to withhold nearly $400 million in US military aid to Ukraine to try to pressure President Volodymyr Zelensky to restart a frozen investigation into the activities of former Vice President Joe Biden and his son Hunter. Hunter Biden was given a seat on the board of directors of Ukrainian energy company Burisma with a $50,000 a month salary in the aftermath of a US and EU-backed coup d’état in Kiev in 2014, despite lacking any job experience in the energy sector or Eastern European affairs. Hunter resigned from the board in 2019.

Trump and the Republicans have claimed that Hunter’s appointment is evidence of illegal activity by the Obama administration. In 2016, the Ukrainian prosecutor investigating Hunter Biden and Burisma was fired during Vice President Biden’s visit to Kiev. Biden later admitted that he put pressure on then-President Petro Poroshenko to get the prosecutor fired, but insisted that this was unrelated to probe into Burisma and his son.

000000
Popular comments
This man is a lunatic, along with his imbecile evangelicals, who shout-down fellow Americans in the same way that his opponent (Trump), exactly as base, deplorable and ignorant as he accuses his opponent to be. THIS is what American politics has become in the wake of HRC: a circus of despicable fools.