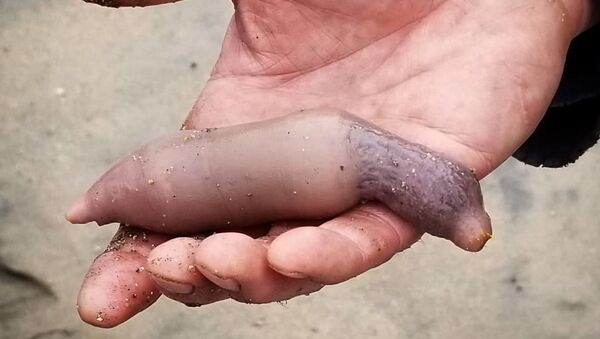 © Photo : Instagram/jasperridge
Subscribe
Just when you thought 2019 had nothing else to offer and it was safe to go back in the water, powerful storms exposed an eyeful of phallic marine worms in Northern California, where untold thousands were spotted on a beach. Word has it that they are very chewy.

Was it the wrath of Mother Earth of perhaps God Almighty?

Thousands of thick, pink, penis-shaped creatures have washed ashore on Drake’s Beach in Point Reyes, California, and questions are being asked online.

These pulsating things are called Urechis caupo, or fat innkeeper worms, and are commonly referred to as “penis fish” for their distinct appearance.

So it's no wonder edgy wisecracks are now all over social media, putting a religious and political spin on the natural phenomenon.

One commenter joked: “God shows displeasure by raining penises down upon the earth.”

An Aussie Twitter user wrote he hadn’t seen “this many penises on a beach since the Cronulla riots.”

“All the news and pics of the ‘penis fish’ in California only proves that d**k pics are not cute y’all,” another commenter said.

I could look at photos of the penis fish all day because I believe in a sex positive ocean!

why name them 'Penis Fish' when they could be called 'Cock-to-Puss' https://t.co/GIUb6Oo04r

And also in the UK Parliament https://t.co/gpC4W3N50G

Thousands of 10-inch "penis fish" are littering a California beach. Also a 3-inch one that insists the water is cold.

Every time I open Twitter and see yet another GD #penisfish pic pic.twitter.com/5wjQItPh2t

​These worms aren't new to humans, but beach-goers rarely seem them because they spend most of their lives buried in the sand. Recent storms have washed away sand from above their burrows, leaving thousands of these worms stranded on the beach.

Urechis caupo filters water through a mucus net to feed on bacteria and plankton, and can also swim using its spatula-shaped proboscis.

A closely-related species called Urechis unicinctus commonly occurs on the coasts of Korea, China, and Japan, and is commonly eaten there both raw and stir-fried.