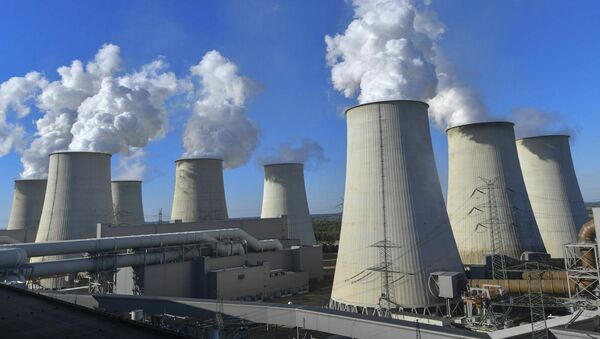 © AP Photo / Patrick Pleul/dpa
Subscribe
Politicians in Brussels are concerned that if they do not protect European industries, which are forced to comply with emissions reduction targets, companies may move abroad to countries with less onerous targets.

European Union member states are understood to be on course to set a carbon border tax, raising the prospect of another escalation in the ongoing fierce trade dispute with the United States.

The intention became clear at this week’s COP25 climate conference, where the international community is trying to negotiate a rulebook on how to implement the 2015 Paris agreement.

Spain’s economics minister, Nadia Calvino Santamaria, said at a press conference that she wants a carbon tariff “as soon as possible” on any country that doesn’t comply with the agreement.

“We need to ensure that climate policy does not create an unlevel playing field between those players which operate in jurisdictions which have higher standards and those that maybe do not," she said, as quoted by Politico.

European Commission Executive Vice President Frans Timmermans said the measure would be adopted as a means to “protect [European] industries”, which are forced to comply with strict greenhouse gas rules as Europe aims to become the world’s first carbon-neutral continent by 2050.

There are concerns in Brussels that if no changes are made, European-based companies might be forced to move to jurisdictions with easier environmental restrictions.

The proposed ‘carbon wall’, if built, would become a particular obstacle to the United States, one of the world’s biggest greenhouse gas emitters, which is set to withdraw from the 2015 pact next year.

The planned tariff also looks like a leaf out of Trump’s playbook: the US President imposed steel and aluminium tariffs on the EU last year to improve the trade balance and give an advantage to American manufacturers. He has also threatened massive levies on European-made aircraft, autos and agricultural goods.

US has concerns over the idea

Senate Energy Chairwoman Lisa Murkowski said she hoped the EU would not impose new tariffs, but former Secretary of State John Kerry predicted that they were imminent.

A senior US official was quoted as saying the tax is “of great concern to us.”

German Chancellor Angela Merkel was the highest-profile European leader to express concern over the plan. She warned that the countries that face the carbon border tax could interpret it “as a kind of protectionist measure.”

However, France, one of the main supporters of this idea, is said to have secured support from Spain and persuaded Germany to reconsider it.

The Paris agreement is scheduled to take effect on 1 January, and the main goal of the summit is to finalise the rules on how to implement it. The summit was supposed to end on Friday but stretched into the weekend as the countries failed to agree over several issues.

It seems that the national delegations were at odds over Article 6 of the agreement, which aims to create a global carbon market. Under this article, a mechanism is being proposed that would allow a nation to meet its emissions target not by reducing them, but by purchasing credits from another nation that comes in under its target. Critics argue that this mechanism would undermine the overall progress.

FeEisi
14 December 2019, 16:13 GMT2
000000
The world in general needs to protect it's self from the US lack of climate control and Trump weakening the ones in the US to promote the dying coal industry. A carbon tariff would get there attention but sanction will follow.