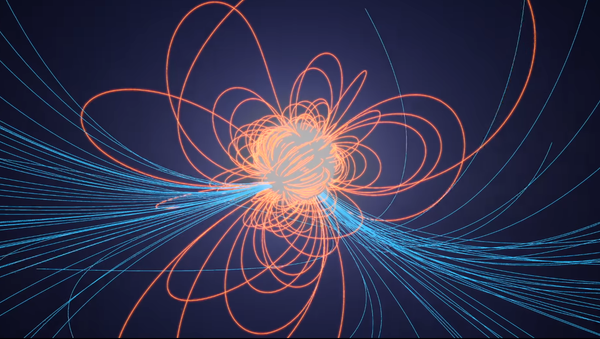 © © NASA
Subscribe
Pulsars, a form of rapidly rotating neutron star left over after a massive star has exploded into a supernova, have fascinated scientists for many decades, given the immense amount of power condensed into a small package that’s often no larger in diameter than a large city.

Researchers from the University of Amsterdam and the University of Maryland have compiled data from the International Space Station’s Neutron Star Interior Composition Explorer (NICER) x-ray telescope to create the first-ever highly precise map of the surface of a neutron star.

NASA released footage of the celestial body, known as J0030+0451, located about 1,100 light-years from the Pisces constellation, with the rotating orb showing extremely bright spots of light near its south pole, believed to be burning at a whopping one million degrees.

The footage is accompanied by a three-dimensional grid model of the solitary pulsar, which has an estimated mass of between 1.3 and 1.4 times that of our Sun, but a diameter of just 25.4 km (for comparison Earth has a diameter of some 12,742 km, while our Sun has one of 1.39 million km). Significantly, the scientists also found that all of J0030+0451’s hot spots are situated near the pulsar’s south pole, challenging textbook hypotheses that a pulsar’s hotspots are located at opposite sides of the star near its magnetic poles.

Scientists used NICER data collected between July 2017 and December 2018 to put together the map and models.

Dr. Cole Miller, an astronomy professor from the University of Maryland who led one of the teams of researchers, said that although scientists’ understanding of how to simulate pulsars remains incomplete, “thanks to NICER’s detailed data, open-source tools, high-performance computers and great teamwork, we now have a framework for developing more realistic models of these objects.”

“NICER’s unparalleled X-ray measurements allowed us to make the most precise and reliable calculations of a pulsar’s size to date, with an uncertainty of less than 10 percent,” the scientist boasted, adding that researchers’ work has “made an important contribution to fundamental physics that is impossible to probe in terrestrial laboratories.”

Paul Hertz, the director of NASA’s astrophysics division, praised NICER’s significance for science, saying that “from its perch on the [ISS], NICER is revolutionizing our understanding of pulsars” thanks to its ability to “probe the nature of these dense remnants [of collapse stars] in ways that seemed impossible until now.”

Pulsars are a mysterious class of neutron star first discovered in 1967 by British astrophysicist Jocelyn Bell Burnell. Neutron stars are formed after massive stars run out of fuel and collapse under their weight to produce a powerful supernova. Packed with energy, pulsars are capable of spinning up to several hundred times a second, all the while spewing electromagnetic radiation into space, and are so dense that their gravity can actually warp nearby space-time – the so-called fabric of the universe described by Albert Einstein in his theory of relativity.