Johnson Won But So Did the SNP – Britain Is Finished, Scotland Will Be Free 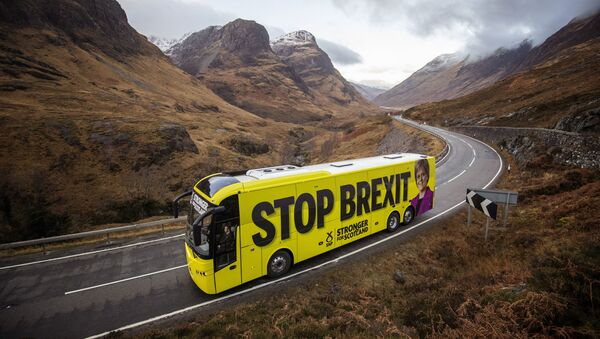 Tommy Sheridan
All materials
What a bittersweet experience here in Scotland! It is well past 3 am on Friday morning and the SNP results in Scotland are devastatingly good.

The party which put Indyref2 and Scotland’s right to choose its own future front and centre of their campaign, and clearly set out a radical list of demands should their votes be required to prop up a minority Labour Government has defied the opinion polls and media attacks to record a fantastic endorsement for IndyRef2, ending Tory austerity and for unilateral nuclear disarmament.

Standing on a radical manifesto that promised real change and the chance to break up the British Union, they have won close to 50% of the votes cast in Scotland and defeated the unholy unionist alliance of Tory, Lib Dems and Labour. Independence for Scotland is now closer than ever. Scotland is clearly a different country and the demand to be set free from Westminster rule to pursue our own and different path to prosperity for all her citizens, not just the privileged few at the top of society is simply unstoppable.

Sadly Many Will Suffer Under the Right Wing Tory Government

That is the sweet part of General Election 2019. The bitter part is the realisation that England and parts of Wales have swallowed the rabid and reactionary media billionaire hype that promoted Boris Johnson as the man to ‘Get Brexit Done’ and lead the UK when the reality is he represents all that is distasteful and rotten in politics and the British Establishment. He is thoroughly untrustworthy, dishonourable, unprincipled and incapable of telling the truth, yet as I compile this piece he is heading for an overall majority in excess of 80 seats. It is deeply depressing and I genuinely fear for the poor, the vulnerable, the elderly and anyone who relies on public services like the NHS, and social care.

This man is no friend of ordinary people. He is part of the elite. The privileged and pampered minority who believe they have an inalienable right to govern. An inherited right to Lord it over us plebs who, according to his dad, are too thick to spell Pinocchio correctly. Clearly looking at a picture of Boris and his arrogant old man standing together is a helpful aid to remind us that there are two C’s in Pinocchio.

Corbyn Is Not To Blame

If Boris Johnson is the answer you are asking the wrong question. Yet working class voters and communities in England and Wales have given him a mandate to govern, a majority to pursue not just Brexit but a right wing programme of government. I feel sorry for millions of ordinary folk who will suffer the consequences of this right wing Johnson government but we here in Scotland have an escape route from this madness and that escape route is independence. We have not just the right but the duty to pursue that escape route on behalf of ordinary Scottish citizens who have fundamentally rejected Johnson and his reactionary politics.

It is 3.24 am and Jeremy Corbyn has just been re-elected MP for Islington and made an acceptance speech which included his intention to stand down as Labour Party leader. I think that is a sad turn of events but an inevitable one. Those right wing Blairites who still squat within the Labour party are falling over themselves to blame Corbyn for the electoral defeat. It is hypocritical nonsense. The Blairites continually undermined Corbyn at every turn despite his election and re-election as leader with an increased majority. Corbyn fought on a radical manifesto in 2017. He was attacked disgracefully by the gutter press and media but he secured the biggest increase in the Labour vote since 1945. The difference two years later is marked. The difference this time is the Blairites forced a changed Brexit position on the Labour party.

In 2017 Labour fought on a socialist manifesto but promised to honour the Brexit result of 2016 and respect the votes of the 17.4 million who voted to leave the EU. Over the last 12 months the anti-Corbyn cabal of Blairites colluded to foist a confused and anti-democratic position upon Corbyn meaning that instead of honouring the Brexit referendum vote of 2016 Labour would seek to subvert it via another vote which satisfied the Blairites but angered core working class Labour voters. Corbyn was far too soft in dealing with his fifth column who did more to help the Tories than promote the cause of Labour. They are to blame for the Labour defeat, not Corbyn.

Jo Swinson Gets What She Deserves – Dumped By the Voters

It is now 3.44am and the sweet part of yesterday’s election in Scotland just got even sweeter. Jo ‘Push the Nuclear Button’ Swinson has lost her seat. Brilliant! Well done SNP. Suck it up Jo Swinson. Your political record in coalition government with the Tories made you unfit to launch the vile and despicable attacks on Jeremy Corbyn. You couldn’t lace his political shoes. His constituents re-elected him to represent Islington. You have been given your P45 by the people you said you were speaking on behalf of, so your resignation will now be welcomed by all who remember your votes for the bedroom tax and cuts to welfare benefits. Good riddance.

Thursday was a bad day for ordinary folk and hard pressed communities but Parliament is only one aspect to society and elections are only snapshots of opinions. I well remember Maggie Thatcher being elected with an even bigger parliamentary majority than Johnson in 1987, she won 58% of the vote and secured a 102 seat majority, but within eighteen months a mass campaign of civil disobedience against her flagship poll tax was organised from Scotland and spread to England and Wales by ordinary people. After a series of mass demonstrations and poll tax non-payment involving 14 million she was forced to resign from office in 1990. Struggle outside Parliament is much more important than what goes on inside Parliament. Defending the NHS from Trump and demanding public services are properly funded and workers are properly paid will take mass struggle and that struggle has to be organised whether Johnson has a majority or not.

It is now after 4am and my eyes are getting tired and my brain is getting weary. The chances are the SNP will win well over 40 of the 59 seats available in Scotland and maybe even as many as 50. That represents an incredible mandate for IndyRef2. The SNP cannot Stop Brexit but they can stop Scotland being dragged down further into a swamp of inequality, discrimination and reactionary chauvinism under Johnson and his reactionary Tory gang. The mandate for IndyRef2 was won by the SNP in the 2016 Scottish election. It was agreed by the Scottish Parliament in early 2017 and reinforced when the SNP won the 2017 General Election in Scotland. Now that democratic triple-locked mandate has won a cast iron endorsement that Johnson simply cannot ignore.

The letter Nicola Sturgeon writes to PM Johnson in the next week or so should not seek permission to hold IndyRef2 but politely and firmly inform him that the vote on Scotland’s future will take place next August or September and demand that the UK Government respects the outcome of that referendum. Johnson has won a mandate to take England and Wales out of the EU but he has absolutely no mandate for Brexit or anything else in Scotland. Nicola Sturgeon has won a resounding endorsement to hold IndyRef2. Given the choice of 5 years under a right wing Johnson led Tory government or a new and independent Scotland promoting fairness, justice and peace, the support for independence will reach unprecedented levels. Independence will secure not 55% but at least 60%. The SNP must now do everything in its power to take us into IndyRef2 next year as they promised to do.

It is 4.17am and Joanna Cherry of the SNP has just been re-elected in Edinburgh with a thumping majority of almost 12,000 despite this being a Tory target seat. She won almost 50% of all the votes cast. All over Scotland the SNP has taken on and defeated the unionist parties. Our independence is now inevitable.

I leave my friends in England and Wales with a fable which sadly sums up yesterday’s election:

“The forest was shrinking, but the trees kept voting for the Axe, for the Axe was clever and convinced the Trees that because his handle was made of wood, he was one of them.”

The British Establishment moved heaven and earth to destroy a decent Socialist for the crime of threatening their power and privilege. Shame on all the journalists who took part in the effective media lynching of a good man.

The Tories lied, they called the victims of Grenfell thick, they said lots of racist stuff, they lied some more, they hid from journalists, they hid in fridges and they ignored the plight of children being treated in hospital on floors and elderly patients lying on trolleys for hours. Yet England voted for them. Once again Scotland said no to the Tories but gets landed with them anyway. No more my friends. Independence is more urgent and justified than ever.

I didn’t think I would rely on former Labour MPs and Ministers to bolster my arguments for independence but things have moved so significantly that the words of former unionist Labour MPs are worthy of quotation from Twitter tonight:

Malcolm Chisolm (former Labour MP, MSP and Minister) – “Brexit mania and character assassination the toxic mix below. Now divergence between Scotland and England on Brexit and much else, including their respective assessments of the most appalling PM of my lifetime, is bound to see support for independence soar to unprecedented levels”.

I concur 100% with those comments.

000000
Popular comments
It is indeed the end of the UK, one way or another....
Rita Lamar
13 December 2019, 10:14 GMT2
000000
It will be interesting to see how the pieces of what formerly was the «United [?] Kingdom» arrange themselves. England to the United States ? Former Labour voters who voted for Mr Johnsson may live to rue the day.... Henri