Gosh, What a Night! 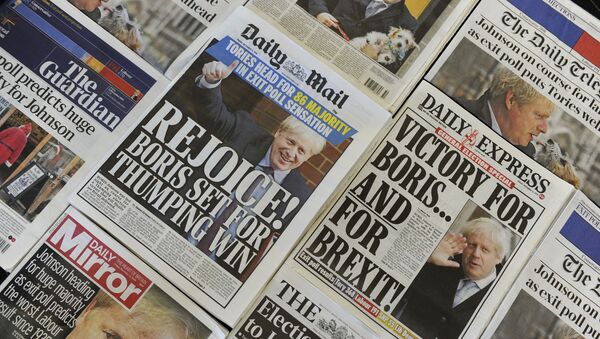 Jon Gaunt
All materials
Boris is correct, absolutely correct: it was a “stonking victory.” The best result since the Thatcher years and in the spirit of the Lady herself, after our troops retook South Georgia in the Falklands war, we should “Rejoice.”

We should rejoice because Boris has taken back our country from the remainiacs, the traitors, the pompous celebrities and the very real threat of a Toy Town Trot bankrupting our country.

We should also rejoice because, even though it is not the Brexit I and millions of others wanted, at last, we are getting out of the EU. As Boris says now “those calling for a second referendum should now put a sock in it.”

Rejoice, because we could have been waking up today to a nightmare on Downing Street with a hung parliament. More delays and obstruction by the losers in the EU referendum debate still denying us the right to get our country back.

The Message is Clear

The people delivered their verdict again last night that they want the UK to be a sovereign nation and now Boris has a clear mandate to deliver it.

Rejoice, in the fact the MSM broadcasters and their pollsters got it so wrong again, just as they did in 2016.

They were telling us that a Corbyn government was possible and that the gap was narrowing and everything was to play for. What utter tosh again!

These are the same people who got the EU referendum so spectacularly wrong and then had faces like smacked bums the next day. Last night was a repeat performance.

The BBC were almost handing out the black armbands as the exit poll and the first results came in and it was clear that Boris was going to get a landslide.

I was laughing like a drain at the faces of the likes of Alastair Campbell, Steve Coogan, Hugh Grant and little Owen Jones as they realised that their game was up.

As for John Bercow, on Sky news, we had the best part of eight hours to watch him squirm and get more and more embarrassed. He was clearly pig sick at the result and he seemed to realise that he was partly responsible for the public’s verdict on the political class who have betrayed us. It was an inglorious end to his biased career.

I agree with Dominic Cummings who said last night that, “MPs need to reflect, the media needs to reflect and they need to realise that the conversations they have in London are a million miles away from reality.' They all need to get out of their bubble and listen to real people around the UK”. But don’t hold your breath and Cummings knows it when he stated in blunt terms “You f***ed it up”.

However, there are no real signs that the broadcasters have got Cummings’ message as this morning Emily Maitlis and others are asking how can Boris win when Theresa May failed?

These people can’t be that dumb, can they? He has a vision, a personality and a desire to make our country great again. Theresa May had no backbone, a trembling lip, a sore throat and the personality of a brown paper bag.

Well now, the ‘effing it up’ has to stop. At the same time, Boris must now deliver on his promises and get us out pronto and sort out the mess of the NHS.

Boris also has to sort out the bias in the Broadcast media. The answer is not more regulation - it is less. Broadcasters should be allowed to be partial just as newspapers are. However, this inevitably means that the public funding of the BBC and Channel 4 News in the form of the outdated and outmoded licence fee has to stop. Keep those Black armbands guys, you will need them for your own funeral!

Rejoice, rejoice in the total humiliation and rejection of Comrade Corbyn’s Commie “back to the Seventies” masterplan.

Corbyn should have resigned last night but the arrogant and bitter old fool instead blamed Brexit and the media for his defeat. He is right, it was Brexit but actually it was his refusal to carry out the wishes of his people and his desertion of his people in the north that led to his crushing defeat.

His sitting on the fence position on a future referendum if he got into power was the most delusional political stance since Comical Ali told us that the USA would never take Baghdad as the tanks rolled in behind him.

The Corbyn Cult is Dead

Rejoice in the rejection of the anti-Semites in the Corbyn Cult by the tolerant and non-racist British public. It has been outrageous the way the Jewish community has been attacked and almost driven out of our country by these terrorist sympathising lefty goons.

Rejoice in the humiliation of the woman who started the campaign saying she should be the PM and ended up not even holding onto her own seat.

Jo Swinson like a demented Head Girl in a girl’s grammar school managed to alienate more and more voters every time she appeared on the TV.

Even in her speech after her defeat, she tried to take the moral high ground suggesting that those who voted Tory were racist or uncaring, “let me say now, for millions of people in our country these results will bring dread and dismay and people are looking for hope.

'I still believe we as a country can be warm and generous, inclusive and open and that by working together with our nearest neighbours we can achieve so much more.

Liberal Democrats will continue to stand up for these values that guide our Liberal movement - openness, fairness, inclusivity. We will stand up for hope.”

No love, you stand for HOPELESS!

Meanwhile, I love the way the sisterhood was put to bed when Nicola Sturgeon showed her true colours and performed a victory dance when she heard the news of Jo Swinson losing her seat.

Now Boris must stick to his guns and not allow another referendum in Scotland, despite the protests of the SNP. We are so much stronger together in a union of the UK, not the EU.

Rejoice in the humiliation of Chuka Umunna who lost his seat too. He now says he will be sticking with the Lib Dems. What other choice does he have as he, like a fat bloke at an ‘all you can eat buffet’, has tried every other party and then put them back down on his political plate?

Rejoice in the news that Anna Sourface has been consigned to the dustbin of political history too. Let’s also NOT mourn Dominic Grieve, David Gauke, Laura Piddock or Tom Brake as they all tried to subvert our democracy and undermine the UK and now they have paid the price for their treachery. What a great day.

Boris was the clear winner last night but Nigel Farage was also a winner and without his help, the victory would have not been so huge. Farage is still the man who has really delivered Brexit and he can rest easy but Boris must now with this huge majority deliver a real Brexit and get on with the trade deal with the USA and others.

Fundamentally Boris won because, despite all of his faults, Brits shared and loved his optimism and belief in the UK and its people.

This is a great country and now we have got it back from the EU and the political class Boris must push on and make Britain great again.

000000
Popular comments
"It has been outrageous the way the Jewish community has been attacked and almost driven out of our country" ---- It has been outrageous the way the Palestinian people have been attacked and driven out of their own country. There, fixed it for you. "Corbyn should have resigned last night but the arrogant and bitter old fool instead blamed Brexit and the media for his defeat." ---- You have consistently attacked the media in just about every article you have shat onto this website. Aren't you part of the media? Haven't you smeared Corbyn just as viciously as the rest of them? Haven't you in each and every article on the subject ensured you flung the exact same dirt as the rest? Were you all reading from the same hasbara cheat sheet? It certainly seems like it, but the English and the Welsh people will now get the government they deserve and they will get it good and hard, particularly those with nothing to give but everything to lose. Everyone else rejected the Tories and that's going to be a problem. "Now Boris must stick to his guns and not allow another referendum in Scotland, despite the protests of the SNP." --- You are a hypocrite and frankly a low rent excuse for a journalist. You extoll the democratic will of the English people in voting for Brexit but you deny the opportunity for the Scottish people to exercise their own democratic rights? "Let’s also NOT mourn Dominic Grieve, David Gauke, Laura Piddock or Tom Brake as they all tried to subvert our democracy " ---- What about Scotlands democracy or is that only for the English? You are witnessing the end days of the "United Kingdom" old boy. Rejoice! I know I certainly will...