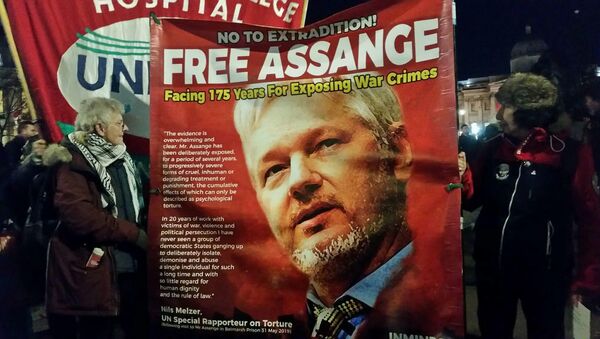 Earlier in the day, Prime Minister Boris Johnson's Tories gained an election victory amid the ongoing extradition case of WikiLeaks founder Julian Assange. Sputnik spoke to Craig Murray, former diplomat and whistleblower, to discuss how the outcomes of the vote would affect the fate of the famous whistleblower.

Sputnik: With the general election result - and the UK’s overwhelming vote towards the established order - how will this work impact Assange’s case?

Craig Murray: Obviously, it's bad news for those of us who support Assange, because you have really a very far-right person, Priti Patel, as the Home Secretary, who's in ultimate charge of the extradition case. And she's somebody who's never shown any concern whatsoever for human rights. So, I think it means that the chances of any relief or any better treatments have been lost. Obviously, there was hope that if the Labour Party had won, then things might be different. But today things look very bleak.

Sputnik: Some people out there are hoping that Boris Johnson's major majority will allow him space and freedom to do what he likes, really, and that he might decide to hold back on Assange- and perhaps even give him some leniency. Is there any chance of that, in your opinion, happening?

Craig Murray: Well, I would love to say there's a chance but I really don't see it. I think a more liberal image of Boris Johnson is a fake construct. I don't think there's anything actually behind it. And certainly, he has been very careful to exclude from power, people like David Davis, for example. He's a former Tory leadership candidate who's on the libertarian wing of the party, the libertarian wing of the party that has been excluded from power, and it's the hard right to be chosen for appointment in his cabinet. So, no, I don't think there's a secret liberal hiding in Boris Johnson.

Sputnik: Assange has been blocked from seeing key evidence from the US authorities throughout the case. Is this protocol? Or do you think as a prisoner, as someone who's making his own case, he should be permitted access to the case material?

Craig Murray: It's quite remarkable the extent to which Assange has been kept in injustice and not allowed material. Not only is he not allowed to see much of the evidence against him on various grounds, apparently including security grant. He's not even allowed to see his own material to prepare his defence and all his papers were quite illegally seized out of the Ecuadorian embassy.

Sputnik: There's the material that is used in the case, and then there's the material produced outside the case- the journalistic material and stories written about Assange. Will this General Election result impact the media treatment of Assange? Could the press become even heavier handed in their demonization of him?

'Forced Rendition': WikiLeaks Editor Warns Assange's Extradition to US May Set 'Dangerous Precedent'
Craig Murray: I think we are seeing a slow foiling from sections of the media in their attitudes towards Assange. It's a bit like turning a supertanker. You know, it's not easy to get them to change direction. But I think they are slowly beginning to realise that the Swedish charges were nonsense, and never were serious.

And that it's beginning to dawn on them that actually, he is now being held for nothing at all except for publishing materials which were leaked to him. And that is a terrible precedent for the media. And so I think we are seeing a slow realisation that the media are shooting themselves in the foot by their constant attacks on Julian Assange. It's one area where I am a little bit hopeful that things may improve in the next few months.