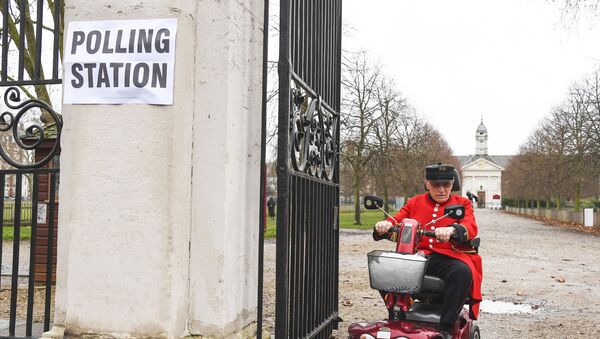 While the final results are still being counted, exit polls and results in several regions in Northern England predict a commanding majority for Boris Johnson.

The results showed that Tories won Blyth Valley, a seat in northern England which has long been a Labour stronghold since the foundation of the constituency in 1950. Conservatives also took Workington, Darlington, Peterborough, Vale of Clwyd, Wrexham, Leigh and Clwyd South from the opposition, destroying the so-called “red wall” of regions expected to vote for Jeremy Corbyn, while maintaining dominance in Chingford and Woodford Green, Vale of Glamorgan, and Thurrock.

Labour won Houghton and Sunderland South with a majority of 3,115 and Newcastle Central with a majority of 12,278 and held Hartlepool with a reduced majority of 3,595. Corbyn’s party even managed to gain Putney from the Conservatives as Justine Greening, the previous Tory MP and former cabinet minister, stood down at this election. Battersea and Canterbury were also held by Labour.

Earlier exit polls showed that the Conservatives can count on 368 out of 650 seats in the House of Commons, adding 51 seats for the Tories in Parliament and securing an 86-seat majority. It would also mean the worst historical loss for the Labour party since 1935 and allows PM Johnson to go ahead with his Brexit deal after the European Union postponed the deadline for Brexit from 31 October to 31 January.

British Prime Minister Boris Johnson told Scottish leader Nicola Sturgeon on Friday there would be no new independence referendum, adding that the previous vote which took place in 2014 must be respected.

"The Prime Minister made clear how he remained opposed to a second independence referendum, standing with the majority of people in Scotland who do not want to return to division and uncertainty," his office said in a statement. "He added how the result of the 2014 referendum was decisive and should be respected."

Sturgeon, for her part, said that she made its clear to Johnson that a mandate to give people a choice must be respected.

The UK is likely to leave the European bloc with a deal, now that Prime Minister Boris Johnson's Conservative Party won a comfortable majority in Thursday’s general election.

With a majority in the House of Commons secured, Johnson will look to get his Brexit withdrawal agreement through parliament by Christmas.

After the Conservative Party secured one of its most dramatic victories in decades in the United Kingdom's Thursday general election, the perfect time for clarity on Brexit has come, French President Emmanuel Macron said on Friday.

"I want to congratulate [Conservative Party Leader and UK Prime Minister] Boris Johnson on his clear election victory. So the time for clarity [on Brexit] has come. And I would like for the withdrawal agreement, which was agreed jointly in October, to be ratified as soon as possible, so that the withdrawal takes place on January 31. This is a permanent position of France, so I welcome this moment of clarity," Macron said at a press conference following the European Council summit.

The UK Conservative Party has secured the most convincing victory in the general election since 1987, gaining 365 seats in the House of Commons, with votes in all the 650 constituencies counted.

Career diplomat Michelle Bernier-Toth has been selected as special adviser for children’s issues, a post that handles cases of US citizen children who are kidnapped by a disgruntled parent and taken overseas, the Department of State said in a press release on Friday.

"Working alongside the Office of Children’s Issues in the Bureau of Consular Affairs, the special adviser advocates for US children who are victims of international parental child abduction, and for their left-behind parents," the release said.

Prime Minister @BorisJohnson returns to 10 Downing Street and is welcomed by staff following an audience with Her Majesty the Queen. pic.twitter.com/oSycEGDqtP

UK Prime Minister Boris Johnson pledged on Friday to get Brexit done by 31 January, as his Conservative Party appears to win the general election.

"We will get Brexit done on time, by 31 January, no ifs, not buts, no maybes, leaving the European Union as one United Kingdom. Taking back control of our law ... money, our trade, immigration system. Delivering all the democratic mandate of the people," Johnson said in his election victory speech.

Many congratulations to PM @BorisJohnson for his return with a thumping majority. I wish him the best and look forward to working together for closer India-UK ties. pic.twitter.com/D95Z7XXRml

The UK Conservative Party will secure a 78-82 vote lead in the country's House of Commons as a result of the general election, a renewed forecast of the Sky News broadcaster revealed on Friday.

If the forecast is proven true, this will be the best result shown by any UK party since 2002.

As of now, votes have been counted in 634 constituencies out of 650. The Conservative Party has already secured 354 seats, while the Labour Party has gained 202 seats, and the Scottish National Party has gained 46 seats.

The UK Tories have secured an absolute majority of seats in the country's 650-member parliament, paving the way for smooth Brexit, and the vote count continues.

"There is a mandate now to offer the people of Scotland the choice over our own future," Sturgeon said.

UK Foreign Secretary Dominic Raab, Prime Minister Boris Johnson, head of the Labour Party Jeremy Corbyn, former Prime Minister Theresa May retained their seats in the House of Commons, while head of the Liberal Democrats Jo Swinson failed to do that, the results of the voting showed on Friday.

Raab will further represent the Esher and Walton constituency, Johnson Uxbridge and South Ruislip, Corbyn Islington North, while May Maidenhead. Swinson failed to be re-elected in the East Dunbartonshire constituency, being defeated by a representative of the Scottish National Party.

Looking like a big win for Boris in the U.K.!

UK Prime Minister Boris Johnson said on Friday that his Conservative Party had got a "powerful mandate" to get Brexit done and unite the nation as well as vowed to focus on the National Health Service (NHS).

"This one nation Conservative government has been given a powerful new mandate to get Brexit done and not just to get Brexit done but to unite this country and to take it forward, and to focus on the priorities of the British people, above all on the NHS. And yes, we will recruit 50,000 more nurses and 6,000 more GPs [general practitioners], and we will build 40 new hospitals," Johnson said at his acceptance speech.

UK Conservative Party to Get from 358 to 368 Out of 650 Seats in House of Commons after the general election, Sky News forecast says.

The Labour Party can count on 192-202 seats, according to the forecast.

UK Labour party's head Jeremy Corbyn said after winning his north London electoral seat that he will not lead the party in 'any future general election campaign'. "This is obviously a very disappointing night for the Labour Party with the result that we've got," Corbyn said.