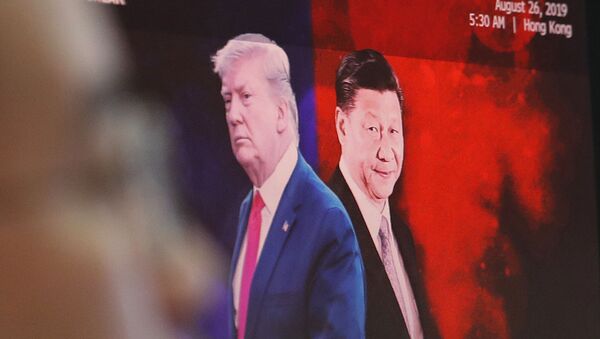 © AP Photo / Ahn Young-joon
Subscribe
The deal includes a delay in the planned new round of tariffs scheduled previously for 15 December. Earlier in the day, President Trump said that the United States and China were on the verge of signing an agreement on bilateral trade.

US negotiators have reached a phase one trade agreement with China, Bloomberg reported on Thursday.

The deal is now awaiting the signature of US President Donald Trump.

It also envisions the delay in the next arrangement of American-imposed tariffs on China.

LATEST: The deal Trump's trade negotiators presented to the president includes a delay in the Dec. 15 new round of tariffs, sources tell me. The trade meeting is over, and the president has signed off.

The United States has also agreed to reduce some tariffs on Chinese goods as part of the deal, Reuters reported quoting a U.S. source familiar with the situation.

China, in return, vowed to make $50 billion in agricultural purchases from the US in 2020.

Previously, the White House announced that the deal was being prepared, but there was no timeline set for when it would be finalised.

Washington and Beijing earlier agreed to ink a phase one agreement, but its prospects were hampered after the US introduced a Hong Kong bill which prompted China to sanction US NGOs and restrict the access of US warships and military aircraft to the territory.

The Phase One deal is expected to cover key trade issues, including intellectual property, financial services and US agricultural exports.

The world's two leading economies have been engulfed in a trade war for over a year due to what Trump has deemed as unfair economic conditions and non-competitive behaviour from China.

The trade row erupted in June 2018, when the United States imposed the first round of tariffs on Chinese imports, prompting Beijing to respond in kind. Tariffs were slapped on tens of billions of dollars worth of Chinese goods, including clothes, toys, phones and laptops. Also among those who have come under pressure is the Chinese tech giant Huawei.

Recently, Trump has called on the World Bank to stop loaning money to China, saying that "it has plenty of it".

China has insisted on a rollback of all tariffs as being an integral part of any trade agreement with the United States. Beijing also has pointed out that the trade war is not beneficial to either side and the world economy.

NYC Federal Reserve Bank economists have also said that the impact of the tariffs on Chinese firms themselves has been minimal as they have either reduced the prices of US-bound goods or found new markets altogether.