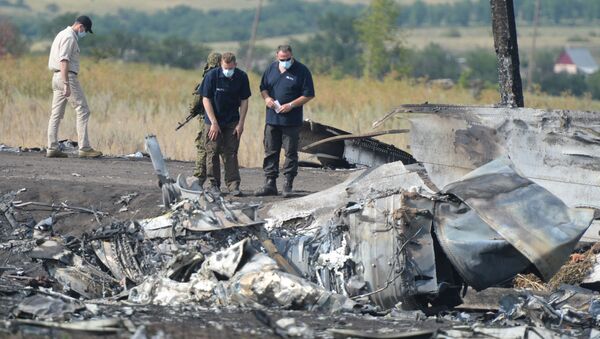 MOSCOW (Sputnik) - According to the Russian Foreign Ministry's spokeswoman, Maria Zakharova, declassified data on Russian military equipment, radar data and other documentation showed that it was a Ukrainian missile that brought down the plane. However, according to the spokeswoman, the vital evidence is neglected by Dutch investigators.

The Netherlands wants to cover up its own mistakes in the investigation of the 2014 Malaysian Airlines MH17 crash over eastern Ukraine, as it accuses Russia of letting Vladimir Tsemakh, a former Donbas militia commander and a suspect in the case, return to eastern Ukraine after being swapped under a Moscow-Kiev agreement on a detainee exchange, the Russian Foreign Ministry's spokeswoman, Maria Zakharova, said on Thursday.

"It is obvious that such a selective approach to working with information does not allow the investigation to move forward and keeps it at a standstill. And the so-called successes that were announced at a press conference of the Joint Investigation Team [JIT] on 19 June are actually quite doubtful — we talked about this at different levels — and are subject to justified criticism from experts and representatives of some states," Zakharova stated.

The spokeswoman suggested that JIT's accusations against Russia are a part of its strategy to cover up its own mistakes in the MH17 investigation.

"There is a feeling against this background that the Dutch Prosecutor's office has found a reason to accuse the Russian side of some bad faith in the approach to cooperation in the execution of various requests for legal assistance exactly to hide own mistakes," she added.

Zakharova also said that all the JIT's claims against Russia were groundless, while Moscow was interested in establishing the real causes of the tragedy.

In June, Tsemakh was abducted by the Ukrainian special forces and taken to Kiev. He was subsequently released in early September in a prisoner swap with Russia and returned to Donetsk.

Flight MH17 crashed with 298 people on board on 17 July 2014, in eastern Ukraine while en route to Kuala Lumpur from Amsterdam, leaving no survivors. Ukraine and the self-proclaimed republics in Donbass have blamed each other for the incident.

The crash is being investigated by the Dutch-led JIT, which claims that the aircraft was downed by a missile originating from the Russian Armed Forces. The Russian Foreign Ministry has refuted the accusation as groundless and called the investigation biased.