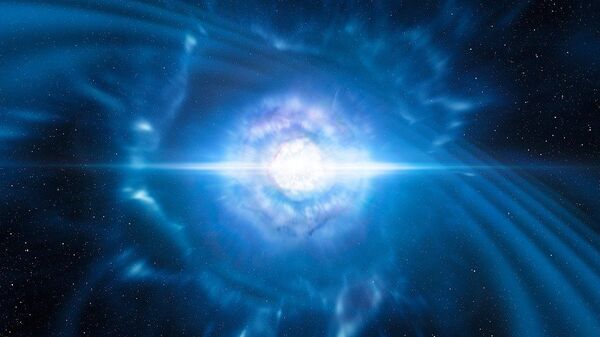 Ilya Tsukanov
All materialsWrite to the author
The neutron star, known as GRO J2058+42, spent nearly a quarter of a decade in a “quiet state” after being discovered in 1995 before lighting up again earlier this year as it consumed a chunk of its stellar twin.

A small neutron star situated between 23,000 and 50,000 light years from Earth (up to a quarter of the distance across our galaxy) surprised a group of Russian astronomers from the Moscow Institute of Physics & Technology, the Space Research Institute of the Russian Academy of Sciences and Pulkovo Observatory after flashing magnetic radiation at Earth in an unusual, never-before-witnessed way.

The scientists, who recently published their findings in the Astrophysical Journal Letters, discovered that unlike most celestial objects, stars and planets including our own, the neutron star, known as GRO J2058+42, does not appear to have traditional magnetic poles (like those found on most stars and planets, including our own), but rather a unique, powerful and disjointed magnetic field structure which includes regions of unusually strong magnetism spread across its surface.

Known to astronomers since the mid-1990s, the GRO J2058+42 pulsar has long fascinated researchers for its “unusual behaviour,” given its tendency to burst in x-rays twice each time it circles its primary star.

However, soon after it was discovered, the star entered a “quiet state,” showing little signs of activity observable by scientists back on Earth. That all changed on 22 March 2019, as a new outburst was registered by the Neil Gehrels Swift Observatory, a NASA space-based telescope designed specifically to detect distant gamma-ray bursts. The outburst was believed to have been caused by GRO J2058+42 swallowing up a chunk of the twin star it orbits. But there was something abnormal about its behaviour.

What makes GRO J2058+42 unique, according to the newly-published research, is the unusual pattern of the beaming out of its ‘cyclotron line’ (a type of electromagnetic radiation emitted by accelerating charged particles deflected by a magnetic field), which was found to be visible only 10 percent of the time during its 3 minute, 16 second rotation period. This is unusual, as in the past, scientists had observed neutron stars falling into one of two categories – those with no cyclotron line at all, and those with an even cyclotron line caused by a traditional, two-poled magnetic field.

GRO J2058+42’s behaviour, the Russian researchers believe, is an indication that GRO J2058+42 may be a unique new kind of neutron star whose unusual magnetic field is visible only when it is observed from the right angle.

In a press statement, Dr. Alexander Lutovinov, co-author of the new study and professor at the Russian Academy of Sciences, explained that “the structure of magnetic fields of neutron stars is a fundamental issue of [their] formation and evolution. On the one hand, the dipole structure of the progenitor star should be preserved during the collapse, but on the other hand, even our own Sun has local magnetic field in homogeneities that are manifested by sun spots. Similar structures were theoretically predicted for neutron stars. It is great to witness them in real data for the first time.”

According to Dr. Lutovinov, the exciting new information about the nature of GRO J2058+42 gives theorists “new factual data for their modelling, and we will have a new tool for studying the parameters of neutron stars.”