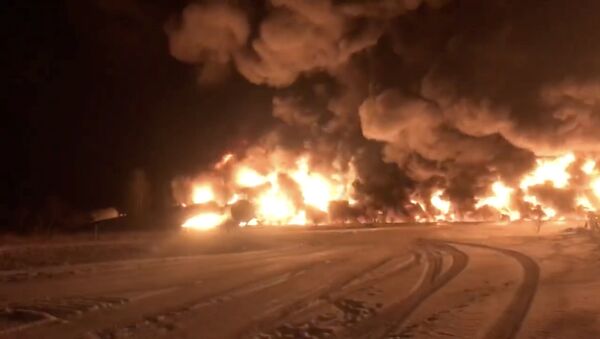 TORONTO (Sputnik) - About 400,000 gallons of crude oil was discharged following a Canadian Pacific Railway (CP) tanker derailment in Saskatchewan province, the Transportation Safety Board (TSB) said in an investigation notice.

"Preliminary examination of the 23 cars suggests that about 19 of the cars lost their entire loads releasing an estimated 1.5 million litres of product to either the ground or atmosphere", the notice said on Thursday.

On 9 December, a train originating at Rosyth, Alberta bound for Stroud, Oklahoma, derailed near Guernsey, Saskatchewan. As a result, crude oil was discharged from the tankers and became engulfed in flames that took 24 hours to put out.

The TSB reported that 20 out of the 33 tanker cars sustained breaches and that ten cars at the tail-end sustained minimal damage and remained intact.

No waterways were affected as a result of the derailment, the TSB said. No injuries were reported in the aftermath of the incident.

In 2013, a train derailment and subsequent explosion destroyed much of Lac-Meganitic, Quebec and killed more than 42 people, in what became Canada's deadliest train crash involving a non-passenger train.