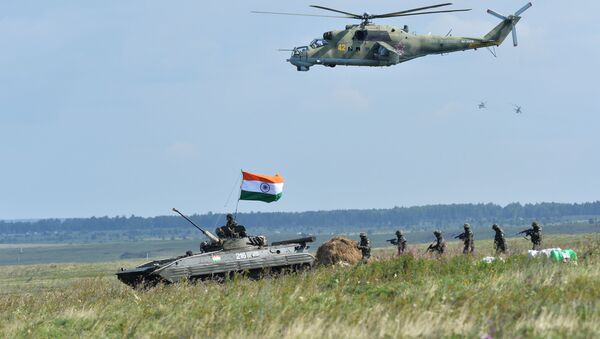 New Delhi (Sputnik): India and Russia conducted their first joint tri-service exercise in 2017, and 'Indra' bilateral naval exercises between the navies of the two countries began in 2003. The engagement advanced into the tri-service scope, with a corresponding increase in the complexity and levels of participation.

The second edition of the Indra tri-service exercise between the armed forces of both the countries has started in the northern Indian state of Uttar Pradesh, Pune in western Maharashtra and the neighbouring coastal state of Goa.

The Indian Army said the Indra-2019 Exercises would further cement the long-standing strategic military ties between the two countries. Indian and Russian contingents will undertake training in drills and demonstrations, counter-terrorism operations and exchange experience in countering-terrorism.

#INDRA2019 -Training together to achieve #Synergy & #Interoperability.
11th edition of ex. commenced with a grand Joint Opening Ceremony at #Babina on 11 Dec. The Tri services contingents of Russian & Indian Armed Forces will rehearse Counter Terrorism drills.
Together We Shall!! pic.twitter.com/g0OjtHMMKJ

The troops will also train their skills in the prevention of arms smuggling via sea routes, countering attacks by pirates, handling and neutralising improvised explosive devices (IEDs) in anti-terror operations, among various other skills.

Following the training, troops will validate their skills and experiences in simulated exercises. The Air Forces will conduct joint exercises in Pune, while the Navies will carry out their joint drills in the Arabian Sea, off the shores of Goa.

According to officials, Naval exercises will be held in two phases – the harbour phase until 15 December in Goa, and a sea phase in the Arabian Sea during the remaining four days.

On Tuesday, three Russian Naval Fleets, the Yaroslav Mudry, Viktor Konetsky and Elyna arrived in Goa to take part in the joint exercises. The Indian side will be represented by INS Aditya, a fleet support ship, the INS Tarkash, a frontline guided-missile frigate, and an array of naval aircraft.