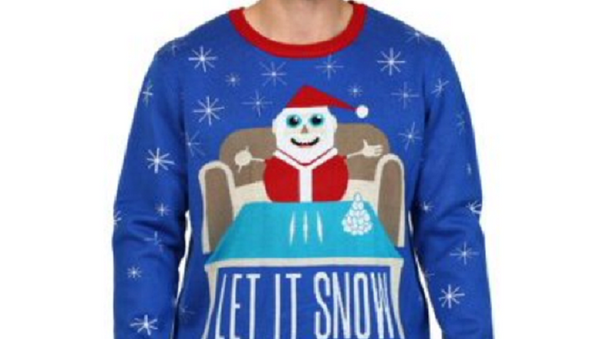 A Colombian government agency threatened to sue Walmart this week for featuring a Christmas sweater with a wide-eyed Santa Claus sitting at a table with lines of cocaine on the company’s Canadian website.

The sweater has the words “Let It Snow” written across it and features Santa, with a pipe-like device in hand, sitting at a table with three lines of cocaine arranged next to a pile of the drug. The sweater was being sold by third-party company called FUN Wear.

​“We all know how snow works. It’s white, powdery and the best snow comes straight from South America. That’s bad news for jolly old St. Nick, who lives far away in the North Pole. That’s why Santa really likes to savor the moment when he gets his hands on some quality, grade A, Colombian snow,” the description of the sweater read.

Even though Walmart issued an apology for the sweater Monday and pulled the garment from its Canadian website, Colombia’s National Agency for the Legal Defense of the State threatened to sue Walmart Tuesday and called for the retailer to indemnify Colombia for damage caused by the sweater and its description.

“The Walmart sweater is an offense to the country. It generates damage to the legal products of Colombia and damage to the country’s reputation,” Camilo Gómez Alzate, the agency’s director, said in a statement obtained by Colombian newspaper El Tiempo. “Although Walmart apologized, the damage was done,” he added.

According to the Washington Post, the agency is already in the process of preparing legal filings in case Walmart refuses to cooperate with the monetary demands. The agency has also requested that Walmart spend 10 times the amount it invested in advertising cocaine-related products to promote legal Colombian products, the Post reported. It’s unclear how much money the agency is asking for or how much money Walmart has spent promoting cocaine-related products.

The potential compensation received by the Colombian government from Walmart would be used to support family members of those killed or injured in drug trafficking incidents.

“Colombia must be respected,” Gómez said, El Tiempo reported “What will the family of a person who died in the fight against drug trafficking feel when a firm like Walmart promotes a bag of cocaine from Colombia?”