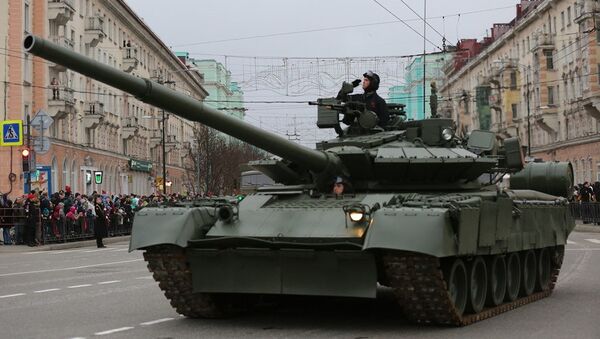 MOSCOW (Sputnik) - The Russian Defenсe Ministry and Rostec signed the contract for extensive repairs and deep modernisation of the T-80 tanks at the Army-2017 defence forum.

The Russian armed forces have received all the modernized T-80BMV tanks under the contact with the Rostec corporation, signed in 2017, Rostec said on Thursday.

"Omsktransmash [subsidiary of Rostec's Uralvagonzavod] has fulfilled a large-scale state defence contract on delivering modernised T-80BMV tanks. Before being delivered to the armed forces, each combat vehicle has passed necessary proving-ground trials, manufacturing tests of all the systems and customer acceptance," Rostec said.

Rostec did not specify how many tanks had been delivered to the armed forces.

According to Omsktransmash Director-General Igor Lobov, all the major characteristics of the tank, including fire efficiency, resistance, mobility and controllability, have been improved through modernisation.