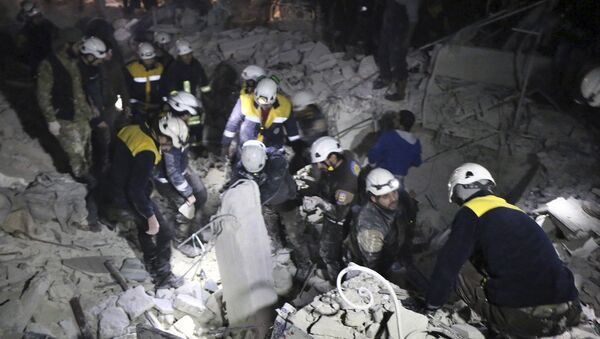 Syria Civil Defence, better known as the White Helmets, is a non-governmental organisation registered in the United Kingdom. The group and its activities are widely endorsed by Western governments. Damascus, however, accuses the organisation of extremism and propaganda dissemination.

The White Helmets are ramping up their presence in Syria's Idlib, potentially readying a provocation, Russian President's Special Envoy Aleksandr Lavrentyev, said on Wednesday at a press conference following talks in Nur-Sultan, Kazakhstan.

Lavrentyev added that Moscow is calling on all its partners to carefully assess the information about the potential provocation.

The White Helmets is a UK-registered NGO. They describe themselves as former bakers, tailors, engineers, pharmacists, painters, carpenters, students and workers of other professions who volunteer to go to the "most dangerous place on earth" and protect local civilians from violence. The group enjoys wide publicity and endorsement in the West but has been accused by Damascus of extremism and spreading propaganda.

Russia considers the group's activity an element of an informational campaign aimed at the vilification of the Syrian government. In particular, Moscow accused the White Helmets of staging a false-flag provocation in Syria in 2013 that later gave grounds for the West to accuse Damascus of chemical attacks.

The Astana format remains the only process that has any real impact on the situation, Lavrentyev said.

"We are confident that [the Astana format is] the only relevant format that can have real influence, real impact on the situation, on the Syrian settlement," added Lavrentyev.

Lavrentyev also said that the work of the Syrian Constitutional Committee should not be artificially accelerated.

The new round of meetings of the constitutional committee was held in Geneva at the end of November, but the meetings of the small group (which is preparing the main initiatives) did not take place due to disagreements between the delegations. Earlier, an opposition member of the Syrian constitutional committee , Kassem al-Khatib, said that the delegation of the Syrian government sets preconditions for negotiations on the constitution and is stalling the process.

On Dialogue Between Damascus and Kurds

According to Lavrentyev, Dialogue between the central Syrian government and the Kurdish-led Syrian Democratic Forces (SDF) is the only possible way to resolve the crisis.

"Building dialogue between the leadership of the SDF and the central Syrian government, or between Kurds and Damascus, is another crucially important aspect. We believe this is the only possible way out, the only right way out," he said.

He added that the SDF as a force is not fully in opposition to the Syrian government.

"Some of the Arab tribes that are part of the SDF are a part of the Arab community. In this respect, we are ready to continue implementing necessary effort in order both to assist the central government and to engage in our mediating missions in contacts with the Kurds," Lavrentyev concluded.

Moreover, according to the envoy, Turkey is not currently capable of fulfilling its obligations on the stabilisation in Syria's Idlib and it does not control some of the radicals present in the neighbouring country, around Aleppo in particular.

"We are working in this direction with our Turkish counterparts. As you know, we have signed two memorandums: the first one in 2018, on creating the Idlib de-escalation zone, ... and the latest memorandum on the creation of a safety zone at the Turkish-Syrian border ... Turkey stays and will stay a neighbour of Syria, and one must communicate with Turkey, build rapport with Turkey ... We think that one must talk with Turkey to make them fulfil the obligations they adopted ... They are not being implemented ... And currently, Turkey is not capable, at least at the time being, to implement the promises they made," Lavrentyev said.

Russia believes that all the sanctions on Syria should be lifted, as this would contribute to the restoration of trade and economic ties and therefore create proper conditions for the returning refugees, the special envoy said.

"We favour the lifting of all the sanctions against Syria, both those imposed by European nations and those imposed by the United States. Firstly, because it is illegal, and secondly because it will contribute to the restoration of diplomatic, trade and economic ties between the countries, this would assist Syria's reconstruction and Syrians' prosperity," Lavrentyev said.

In May, the US Senate Foreign Relations Committee ruled to impose new restrictions on the Syrian government, its supporters and those who fund the country’s aircraft and energy industries. Damascus in association with Moscow, later called on Washington and Brussels to lift economic sanctions against Syria, stressing that the restrictions complicated acquisition of medical products and raw materials for producing medical products.