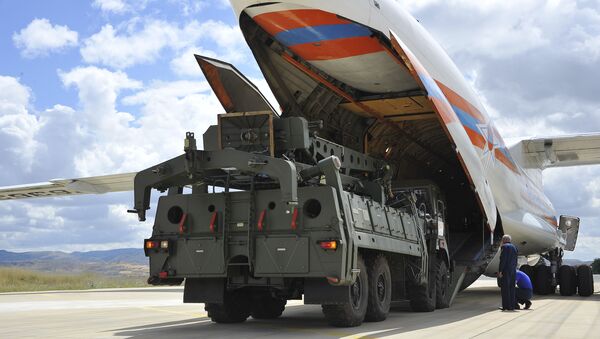 © AP Photo / Turkish Defence Ministry
Subscribe
Washington has repeatedly threatened to sanction Turkey over its decision to buy the Russian air defence system, and moved to halt the delivery of F-35 fighter jets to Ankara over the purchase earlier this year.

The Senate Foreign Relations Committee has passed the 'Promoting American National Security and Preventing the Resurgence of ISIS Act', which includes sanctions against Turkey over its decision to buy Russia's S-400 air defence system.

Senator Bob Menendez, the bill's co-sponsor and ranking committee Democrat, tweeted Wednesday that the legislation "makes clear to Turkey that its behaviour with respect to Syria is unacceptable, and its purchase of the S-400 system is untenable."

Turkey’s actions over the past year are truly beyond the pale.

This bill makes clear to #Turkey that its behavior with respect to #Syria is unacceptable, and its purchase of the S400 system is untenable.

The bill's passage followed an appeal by a bipartisan group of senators including Democrat Chris Van Hollen and Republican Lindsey Graham to Secretary of State Mike Pompeo earlier this month, with the appeal urging Pompeo to punish Ankara, and suggesting that a failure to act was "sending a terrible signal to other countries that they can flout US laws without consequence."

The sanctions legislation was passed 18-4 Wednesday, and now faces a vote before the rest of the Senate. Committee chairman Senator Jim Risch said following the vote that "Now's the time for the Senate to come together and take this opportunity to change Turkey's behaviour."

Serdar Kilic, Turkey's ambassador to the United States, responded to Menendez's tweet, accusing the senator of "supporting a terrorist organization with the pretext of fighting another," in reference to the Syrian Kurdish militia, which Ankara classifies as terrorists, and saying that the sanctions move was shameful.

What about your actions senator?Supporting a terrorist organization with the pretext of fighting another, calling it an ally, turning a blind eye to the miseries it inflicts on the Syrian people, trying to deprive a NATO ally from its right to fight against terrorism. SHAME

According to Kilic, with the sanctions bill, the US was "trying to deprive a NATO ally from its right to fight against terrorism."

Ibrahim Kalin, a special advisor and press spokesman for President Erdogan, said Turkey could not be forced to "retreat" on the S-400 issue.

"After Congress the bill will land on President Trump's desk. And we know that Trump has a positive attitude toward Turkey. In any case, this decision will have any impact on our plans for the S-400. The process will continue...There is no retreat on this subject. Our military will control and use the S-400," Kalin said, speaking to reporters.

Republican Senator Rand Paul of Kentucky had criticised the legislation earlier this week, suggesting that it would make it more difficult for President Trump to negotiate with his Turkish counterpart, President Recep Tayyip Erdogan.

In addition to the S-400 issue, which has been a bone of contention in relations between the two NATO allies for over two years, the US has expressed concerns over Turkey's October offensive into northern Syria targeting Washington's Syrian Kurdish allies.

In comments Wednesday, Senator Risch suggested that the tensions with Turkey were "not some minor dustup," but "a drift by this country, Turkey, to go an entirely different direction than what they have in the past." According to the senator, Turkey has "thumbed their nose at us, and they've thumbed their nose at their other NATO allies."

Also on Wednesday, in testimony before the House Armed Services Committee, Secretary of Defence Mark Esper and Joint Chiefs of Staff Chairman Gen. Mark Milley expressed concerns over Turkey's drift away from the US, and Moscow's growing cooperation with traditional US allies including Turkey, Egypt and Saudi Arabia. Secretary Esper said he was most gravely concerned by the ties between Russia and Turkey, and what he described as Turkey's move away from the "NATO orbit."

Earlier this week, Turkish Foreign Minister Mevlut Cavusoglu warned that Ankara may force the US to vacate the Incirlik airbase if Washington moves ahead with sanctions over the S-400 purchase. He added that Ankara would not support NATO's efforts to 'protect' the Baltic states from the alleged Russian threat until the alliance adopted a plan to protect Turkey from the "terrorist" threat posed by Kurdish militias.

Russia and Turkey penned a $2.5 billion agreement on the delivery of S-400 air defence systems to Turkey in late 2017, with deliveries beginning in July of this year. After the deal was signed, Washington asked its Turkish allies to cancel the defence contract with Russia and buy US Patriot missile systems instead, with Turkey refusing. This prompted the US to exclude Turkey from the F-35 fighter jet programme, with Turkish officials subsequently hinting that they may purchase Russian fighter aircraft instead.