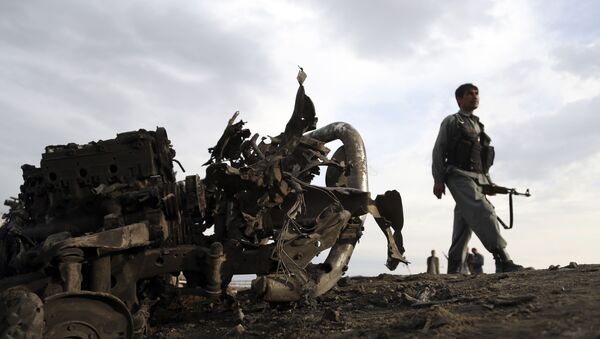 © AP Photo / Rahmat Gul
Subscribe
Bagram Air Base serves as the main US military base in Afghanistan. Reports in the immediate aftermath of the attack suggested that a US military convoy was the target, but the US military said the powerful explosion targeted a medical facility near the base.

A suicide bomber detonated explosives near the United States' Bagram Air Base in Afghanistan on Wednesday, the US military has said.

The bombing targeted a medical facility outside the base, located north of the capital Kabul in Parwan Province. Gen. Mahfooz Walizada, police commander of the province, confirmed the attack in a separate statement and said it had destroyed several homes.

There were no coalition or US casualties, Resolute Support, the NATO-led non-combat mission in Afghanistan, has confirmed. The mission said, however, that the medical facility, which is being constructed for locals near the base, was badly damaged.

Reuters has quoted a spokeswoman for the Parwan governor as saying that five people, all of them Afghans, were wounded in the attack. She said the attackers tried to enter the base but were “contained and repelled”. No group has claimed responsibility for the attack so far.

Resolute Support, which consists of some 17,000 service members from NATO allies and partner countries, provides training and assistance for Afghan security forces in their fight with local extremist groups such as the Taliban.

Violence in the Central Asian nation has been on the rise this year, with the United Nations blaming both anti- and pro-government forces. In the first nine months of 2019, according to the United Nations Assistance Mission in Afghanistan (UNAMA), over 2,500 civilians were killed and more than 5,600 wounded.

Most casualties were caused by suicide attacks or improvised explosive devices. July of this year was described as the single most violent month since records began in 2009.

UNAMA attributed 62 percent of all casualties to “anti-government elements”, while the number of casualties caused by pro-government jumped 26 percent.

For over a year now, the United States and the Taliban have been trying to reach a political settlement that would include the withdrawal of foreign troops from the country after 18 years of war in return for security assurances from the rebels.

The government in Kabul has not been party to the talks because the Taliban, which now controls more territory than ever since the 2001 US invasion, refuses to hold a dialogue with it.

US President Donald Trump abruptly suspended the talks in early September, after the group claimed responsibility for a car bombing in Kabul that killed 12 people and wounded 20.

The negotiations were ressurrected in Doha, Qatar on Saturday after a three-month halt, two weeks after Trump said the Taliban still “wants to make a deal”.