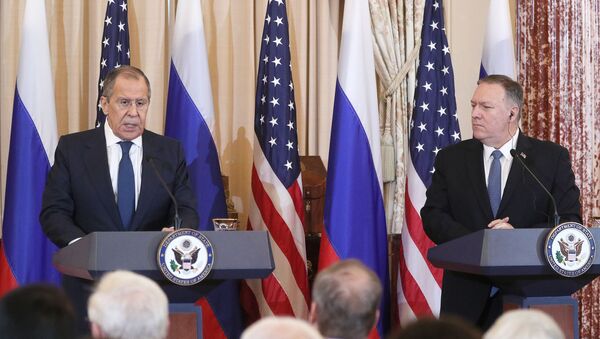 © Sputnik / ТАСС/POOL
/
Go to the photo bank
Subscribe
As Russian Foreign Minister Sergei Lavrov pays a visit to Washington, it seems Turkey may get a pass for resettling Syrian refugees on Kurdish land due to Ankara’s geopolitical value. However, the fates of Syria’s Idlib and the many US-Russia arms control treaties still hang in the balance, a security analyst told Sputnik.

The US and Russia may ignore Turkey’s efforts to resettle Syrian refugees in northeastern Syria due to Ankara’s geopolitical position, and the US appears reluctant to renew its New START treaty with Russia, international affairs and security analyst Mark Sleboda told Radio Sputnik, commenting on Tuesday’s meeting between Lavrov and US Secretary of State Mike Pompeo.

“There’s a broad array of issues that they are talking. I’m certain that Syria is going to come into this as Russia moves into vacated positions in Syria where the US has basically pulled their military occupation south and is still sitting on Syria's oil fields, which Russia regards as a blatant aggression and violation of international law,” Sleboda told By Any Means Necessary cohosts Sean Blackmon and Jacqueline Luqman.

Turkish President Tayyip Erdogan reaffirmed his plans on Monday to resettle about a million Syrian refugees in northern Syria in an area where Ankara conducted a military incursion back in October against the Kurdish YPG militia. Through the incursion, Turkey took control of a 75-mile long and 18-mile wide piece of land stretching between the cities of Ras al Ain and Tel Abyad. Turkey has previously said that it plans to settle around 2 million Syrian refugees in a 275-mile “safe zone” in northeastern Syria and has called on NATO allies to help financially with the resettlement efforts.

“This is a big deal. This is absolutely a land grab by Turkey, which intends to form a loyal protectorate on Syrian soil along the entire length of the border. They intend to basically ethnically cleanse this area of what is a great deal of native Kurdish population and resettle Syrian refugees and - it must be said - the families of jihadists around the world that have fought in the conflict,” Sleboda said, also noting that “both Russia and the US are wary about permanently alienating Turkey because of its important geopolitical position - both for resolving the conflict in Syria as well as for greater control of the Middle East.”

Lavrov told reporters later Tuesday that although militant Jabhat al-Nusra, better known as Al-Qaeda in Syria, had seized control over the Idlib de-escalation zone, “the final result of the development of the situation should be complete liberation of this zone from terrorists and restoration of the legitimate government’s control over this entire territory.” Al-Nusra has since become part of the coalition calling itself Hayat Tahrir al-Sham.

Lavrov and Pompeo also discussed the New Strategic Arms Reduction Treaty (New START), which is set to expire in 2021. New START, signed in 2010 by the US and Russia, is the successor to the Cold War-era START I and 2002’s Strategic Offensive Reductions Treaty.

Under these treaties, the US and the Union of Soviet Socialist Republics - and later the Russian Federation - agreed to reduce and limit strategic offensive arms. The Russian foreign minister reaffirmed Russia's position during the Tuesday meeting that it is prepared to extend New START and that Russia will refrain from deploying intermediate-range missiles as long as the US reciprocates.

“There's a great deal of both military and political deconfliction that needs to go on in Syria, with the two most militarily powerful countries in the world in a contested situation in such a tight space. But also the New START treaty is going to expire in 2021, which is the granddaddy of the Cold War strategic stability architecture that limits missiles and warheads on both sides. Russia has stated that they are ready to just renew the contract as-is. The US has given no indication so far that it is interested in renewing New START at all, which is kind of scary,” Sleboda said.

“Hopefully they will be discussing this, and Lavrov will be able to provide some amount of reason to a Trump administration that seems absolutely allergic to any kind of international treaties that they view as hobbling or restraining US power in the world,” he explained.

The US formally withdrew from the Intermediate-Range Nuclear Forces Treaty (INF) Treaty on August 2, citing alleged Russian violations as an excuse, along with the reluctance of other countries, including China, to join the deal. The Cold War-era treaty was signed by the US and Soviet Union in 1987, banning all short-medium-range (310-620 miles) and intermediate-range (620-3,420 miles) ground-launched missiles.