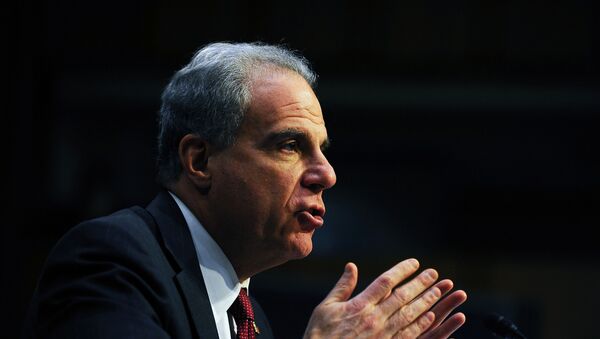 Horowitz’s report, which probed the FBI and DoJ’s handling of applications for secret warrants from the Foreign Intelligence Surveillance Court to watch key Donald Trump campaign figures in 2016, found extensive procedural fault with the agencies but no political bias.

“Horowitz interprets his mission in a narrow sort of very legalistic manner, which is kind of his job, but it’s frustrating for the rest of us because he uses bias, the term ‘bias,’ in a very narrow sense,” Lazare, a journalist and author of the books “The Frozen Republic,” “The Velvet Coup” and “America's Undeclared War,” told Radio Sputnik’s Loud and Clear Wednesday.

However, he noted that the investigation by Durham, appointed by Attorney General William Barr in May to investigate the origins of Russiagate following the Mueller Report’s refutation of the Russian collusion narrative, will be far more wide-ranging and comprehensive in scope than Horowitz’s watchdog report.

“In that narrow sense, he found that Bill Priestap, the number 2 or 3 guy in the FBI who approved the investigation, did not appear to be operating from a position of bias,” Lazare said of Horowitz’s report. “But at the same time, it’s clear that if you ask how this investigation went on for so long and how it’s so thoroughly hopped the rails in a really frightening fashion, then clearly, the larger political atmosphere comes into play.”

“And it’s not just bias against Trump; it’s bias against the Russians. I mean, [former FBI agents] Lisa Page and Peter Strzok in their texts that they were exchanging expressed sentiments about the Russians that if you substituted the word ‘Jew’ or ‘Black,’ would be seen as outrightly bigoted in the most extreme sense. I mean, Lisa Page said that Russians are ‘probably the worst, very little I find redeeming about them, even in history. A couple of good writers and artists I guess.’ And Strzok replied, ‘f**king conniving savage cheaters, at statecraft, athletics, you name it. I’m glad I’m on Team USA.’”

“Can you imagine a US attorney investigating Wall Street corruption going on about Jews being conniving cheaters, or someone investigating the Mafia going on in the same way about Italian Americans? It’s astonishing,” Lazare told hosts Brian Becker and John Kiriakou. “So clearly the atmosphere was poisonous, and clearly it promoted an atmosphere of paranoia toward Russians, and the sense that ‘anything goes, we’re in a battle for our lives, and therefore we could cut corners and ignore, and not take the usual precautions.’”

“I think it’s really an amazing moment. I think it’s really a breakthrough,” he said, noting that a comparatively small part of the media world “have been hollering nonstop that none of this made sense, the FBI was out of control, this whole thing had been concocted out of nothing. But now we’re seeing the truth laid out, and it’s very disturbing. Just watching the chatter on CBS News, it seems to me that the journalists are beginning to wake up to the fact that something really seriously awry was going on.”

“The FBI supposedly briefed Donald Trump in August 2016 but was really probing him to see if they could get any kind of incriminating data on him. This is dangerous stuff. As I think [South Carolina Republican Sen.] Lindsey Graham said, ‘How do I know the FBI isn’t probing me?’”

Kiriakou, a former CIA analyst and agent, noted that “we don’t know,” because the FBI can “on the flimsiest of pretexts, investigate literally anybody they want, and there’s nothing you can do about it.”

Lazare concurred, noting “that was the whole point” of Monday’s IG report. “There’s no oversight. I mean, the FBI went rogue, and it went rogue because there was no one to tell it otherwise. And a powerful police agency like this going rogue is a really scary prospect, and investigating a presidential candidate - wow, the mind reels,” he said.

However, Durham’s much anticipated report for the attorney general is still to come, and the attorney has already expressed his disagreement with some of Horowitz’s conclusions.

“Durham’s brief is much broader: he has subpoena power - and I don’t believe that Horowitz did - and he’s looking not only to the FBI and how the FBI applied for these FISA [Foreign Intelligence Surveillance Act] warrants against this poor guy [former Trump campaign adviser Carter Page]. He’s looking at the whole grand sweep of the operation, including the role of the intelligence agencies, and that is crucial,” Lazare noted.

“I mean, this started with a guy named Joseph Mifsud, who the Mueller Report strongly suggests is some kind of Russian agent. But we have a wealth of information indicating the opposite: that he is, in fact, a Western intelligence agent. So this whole thing begins with a Western intelligence agent. How did that happen? Who put him up to this? Was it his own initiative? Did he consult with anybody else? We’re really getting into the Heart of Darkness here,” Lazare said.

“Horowitz has lifted up one small corner of the blanket, and what he found is amazing, but we have to wait until the entire blanket is removed and we find out really the full story as to how this operation began, who was involved, who was involved from the earliest stages, too. That’s the really critical point. And the critical moment is from December 2015 to March 2016, when Mifsud first sits down with George Papadopoulos,” Trump’s former campaign foreign policy adviser.

“But we have evidence, we have reports that the various international intelligence agencies in as many as 10 or 12 different countries were sharing information, exchanging chatter about Russian contacts with the Trump campaign, essentially convincing themselves in their paranoid state of mind that something conspiratorial was going on,” Lazare said. “And that’s the crucial moment; that’s when the whole process takes flight.”