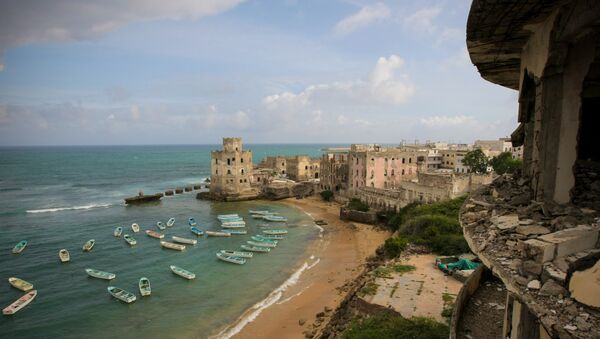 MOSCOW (Sputnik) - At least four people were killed and six others were injured in an attack by militants on a hotel in the Somalian capital of Mogadishu on Tuesday evening, Xinhua news agency reported, citing a police source.

Previous reports said that armed militants wearing police uniform had attacked Hotel Syl in Mogadishu. The attack culminated in a shootout between militants and local security forces. Two members of parliament and a former Somalian interior minister were injured in the attack, local broadcaster Dalsan reported.

The militants of the Al-Shabab radical group claimed responsibility for the attack.

"We heard the sound of fire and when we came, we learned five militants broke into the hotel but our forces are now fighting them inside the hotel. We can confirm four people were killed in the attack and six others injured, the death toll could rise as many people were inside the hotel including members of parliament", the source said as quoted by the media outlet.

The media outlet said, citing Zakia Hussein, deputy commissioner of the Somali Police Force, that two attackers had been killed outside the hotel, while others continued shooting inside. Over 100 people have been evacuated.

The US military have been cooperating closely with the Somali authorities in targeting terrorists. In September, US forces killed 10 Al-Shabab militants in retaliatory airstrikes.