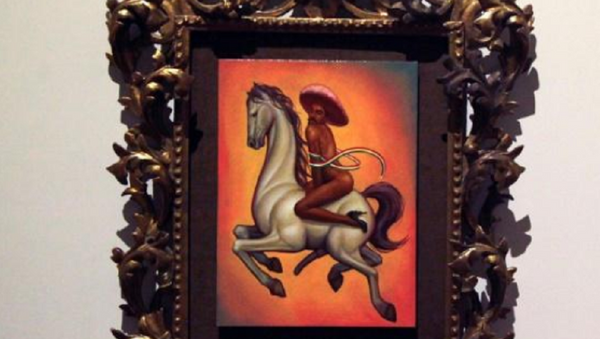 A new exhibit displaying a portrait of a leading Mexican revolutionary has been met with protests by locals who claim that the painting of Emiliano Zapata striking an unconventional pose is offensive and denigrating.

The image, which was finished by painter Fabian Chairez in 2014, shows a naked Zapata wearing a pink hat and high heels while sitting on a horse that has an erection. The painting is called “La Revolución” (“The Revolution”) and is displayed in the Palacio de Bellas Artes, a cultural center in Mexico City.

​The painting is part of an exhibit that celebrates the 100th anniversary of Zapata’s death. Zapata, who was assassinated in 1919 during the Mexican Revolution at the age of 39, is considered a hero by many Mexicans.

On Tuesday, hundreds of demonstrators entered the Palacio de Bellas Artes while chanting “Burn it! Burn it!” in protest of the painting. Many of the protesters were campesinos, or farm laborers. Zapata himself was a campesino from the Mexican state of Morelos.

​“This isn’t freedom of expression, it is debauchery! It’s degrading. They can’t exhibit our history that way,” Antonio Medrano, one of the protesters, is quoted as saying by the Guardian. “They can’t permit this kind of mockery.”

However, Chairez expressed confusion over the demonstrations.

“I’m pretty surprised by this violent demonstration … Why does the feminine figure have to inspire this much offense?” Chairez is quoted as saying.

​The painting has also garnered criticism from Zapata’s family members, including his grandson Jorge Zapata, who said that he plans to take legal action against the artist.

"For us as relatives, this denigrates the figure of our general, depicting him as gay," Zapata is quoted as saying to AP.

​Exhibition curator Luis Vargas has said that the exhibition won’t remove the painting, as it is just an artistic portrayal of Zapata. However, demonstrators have said that they will protest at the cultural center daily under the painting is removed. The exhibition is supposed to run until February 2020.