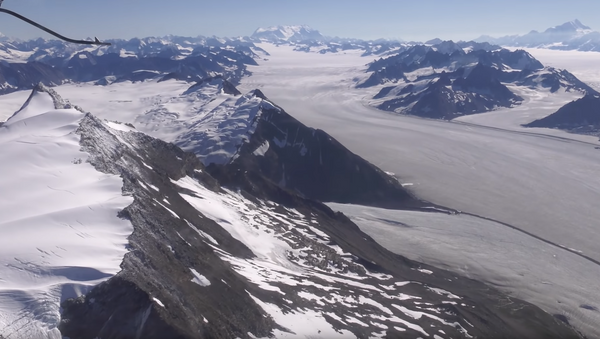 © YouTube/NASA Goddard
Subscribe
Decades of satellite images from the NASA-US Geological Survey Landsat program have been compiled and released by scientists who say the events seen in their time-lapse video are a clear indicator of a warming climate’s impact on ice masses around the Earth.

A group of scientists attending the annual conference of American Geophysical Union in San Francisco, California, on December 9 unveiled never-before seen time-lapse footage that included images of disappearing glaciers and thinning ice sheets in Alaska, Greenland and Antarctica, according to a press release from NASA on Monday.

Glaciologist Mark Fahnestock of the University of Alaska Fairbanks, who compiled images of Alaska and the Canadian territory of Yukon for a brief clip that spans from 1972 through 2019, asserted that it is clear that the Earth’s warming climate is having a significant impact on glaciers in the region and has even brought about surges of melting during some periods.

“We now have this long, detailed record that allows us to look at what’s happened in Alaska,” Fahnestock said, as reported in the NASA release. “When you play these movies, you get a sense of how dynamic these systems are and how unsteady the ice flow is.”

The massive Hubbard Glacier, located in both Alaska and the Yukon, has reportedly retreated some 3 miles (5 kilometers) over the past 48 years.

“That calving embayment is the first sign of weakness from Hubbard Glacier in almost 50 years – it’s been advancing through the historical record,” the University of Alaska Fairbanks glaciologist noted.

However, these changes can vary drastically between each ice mass. For example, Alaska’s Columbia Glacier has been labeled one of the world’s fastest-moving glaciers and, according to NASA data, has retreated rapidly, traveling some 12.4 miles (20 kilometers) since the mid-1980s. Records prior to that period, dating back to 1972, showed the glacier as relatively stable.

Fahnestock explained that while the Hubbard Glacier has traveled a shorter distance in the same period, it is exhibiting the same “calving embayments” that were present in Columbia Glacier in the decade prior to its accelerated retreat.

As for Greenland’s progression over the decades, Michalea King of Ohio State University analyzed Landsat data from 1985 to 2018 and found that glaciers around the territory have, on average, retreated 3 miles (5 kilometers). Additionally, the US scientist found “a very clear relationship between the retreat and increasing ice mass losses from these glaciers” during the period.

The University of Liverpool’s James Lea also observed data on Greenland’s glaciers and ice sheets, but instead focused on the ice that was melting on top of the masses, forming “meltwater lakes” that measure up to 3 miles (5 kilometers) across and can drain through the glacier or ice sheet in a matter of hours. 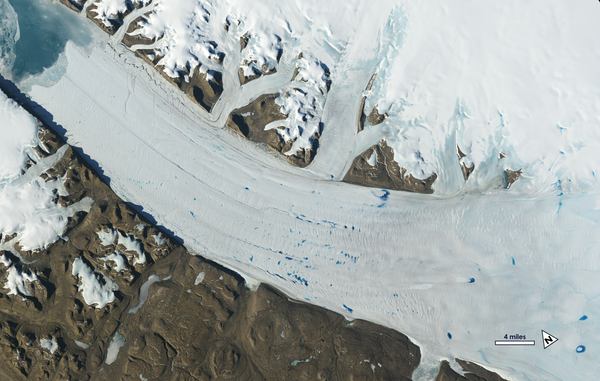 New time-lapse videos of Earth’s glaciers and ice sheets as seen from space – spanning nearly 50 years – are providing scientists with new insights into how the planet’s frozen regions are changing.
© NASA/Matt Radcliff

“We looked at how many lakes there are per year across the ice sheet and found an increasing trend over the last 20 years: a 27% increase in lakes,” he explained. “We’re also getting more and more lakes at higher elevations – areas that we weren’t expecting to see lakes in until 2050 or 2060.”

This constant pooling and draining of meltwater is significant because it thins the glacier or ice sheet and also causes the mass to speed up, accelerating its demise.

However, meltwater lakes do not always drain immediately. In the case of some pools insulated by layers of snow within Antarctic ice sheets, meltwater lakes can remain present for several months before draining. Using microwave radar images from the European Space Agency’s Sentinel-1 satellite, Devon Dunmire of the University of Colorado, Boulder, was able to detect liquid water hidden in various areas of the George VI and Wilkins Ice Shelves, which border the Antarctic Peninsula.

“Not much is known about distribution and quantity of these subsurface lakes, but this water appears to be prevalent on the ice shelf near the Antarctic Peninsula,” Dunmire said, explaining that the number of pools found may show that the process is becoming more common than previously thought.

“It’s an important component to understand because meltwater has been shown to destabilize ice shelves,” she stressed.