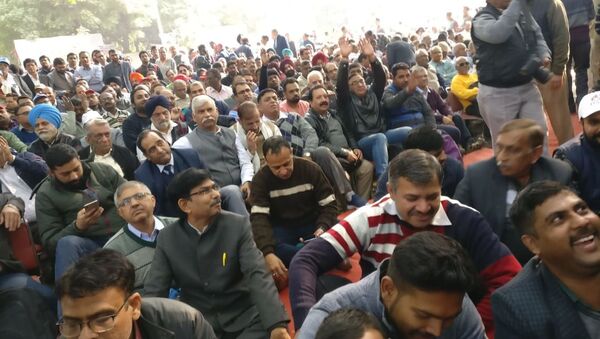 New Delhi (Sputnik): Employees of state-owned banks in India are agitating against the government’s plan to consolidate the banking sector in the country by merging 10 state-run banks into four, with workers fearing job cuts in the process.

Two major banks unions in the country –the All India Bank Officers’ Confederation and the United Forum of Bank Unions – supported by the two Communist parties of India, held a massive protest outside Parliament in the national capital, to oppose the merger and possible privatization of state-run banks.

The leaders of various trade unions and the Communist parties called the ruling government “anti-worker and anti-people”.

D Raja, General Secretary of the Communist Party of India questioned the economic policies of the present government saying: “The Finance Minister of the country has announced a slew of measures in the name of ease of doing business… but the economy is in shambles, the Gross Domestic Product (GDP) is falling… and this government is worried about Article 370, and the Citizenship Bill.”

Raja alleged the purpose of the merger was nothing but an effort to consolidate all deposits to help all corporate houses and big businesses houses. “Is this the way to run the economy?” he asked.

According to official figures, state-owned banks account for nearly two-thirds of the banking assets in the country.

This is not the first time that bank employees have hit the streets over the matter. Affecting bank operations countrywide, nearly 300,000 employees of public sector banks also went on strike in October.

However, the government claimed in Parliament on Tuesday that there would be no loss of jobs due to the consolidation of the state-owned banks.