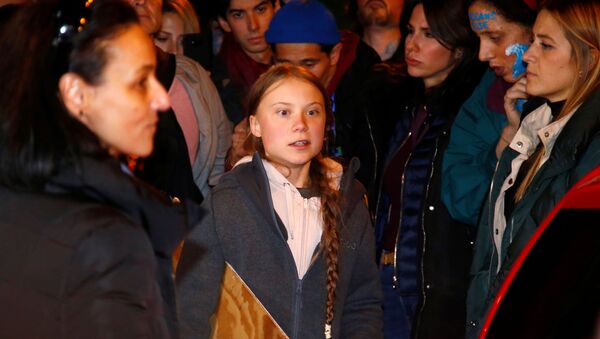 © REUTERS / JAVIER BARBANCHO
Subscribe
Greta Thunberg, 16, who has been elevated to the status of climate guru by politicians and media alike, has alongside 14 fellow teenage activists urged Norway and Canada to wind down their oil and gas production, which, she claimed, violates children’s rights around the world.

Continuing to extract oil and gas violates the UN Convention on the Rights of the Child. This is Greta Thunberg's message to Norwegian PM Erna Solberg and her Canadian counterpart Justin Trudeau.

“Norway must honour its responsibilities to children everywhere", Thunberg said in a letter to Norwegian Prime Minister Erna Solberg co-signed with 14 other activists. According to the activists, Norway must “demonstrate how a major fossil fuels producer and exporter can transition away from these pollutants”, which would “blaze a trail for other fossil fuel-reliant economies to follow”.

While hailing Norway as a champion of international climate preservation, the petitioners stressed that it had failed to reach its own climate targets. The letter highlights Johan Sverdrup, a recently discovered oil field with a capacity of 660,000 barrels of oil per day, according to Equinor.

“These countries need to take steps to protect the future of my generation”, 14-year-old Alexandria Villaseñor, the US's answer to Greta Thunberg, who has been arranging similar strikes outside the UN headquarters in New York, told Norwegian national broadcaster NRK, describing the climate crisis as “the biggest challenge my generation is facing”.

On #HumanRightsDay, myself, @GretaThunberg
and all the petitioners of #childrenvsclimatecrisis, call Canada and Norway out for violating children's rights.https://t.co/VfadHqgCXH

​In addition to Thunberg from Sweden and Villaseñor from the US, the petitioners come from an array of places, including the Marshall Islands, Palau, Brazil, Argentina, France, Germany, Tunisia, Nigeria, India, and South Africa.

“We have a ceiling. The world should not get more than 1.5 degrees warmer. By starting new oil and gas production, you ignore this ceiling. You prefer gasoline in a world that is already on fire”, says Michael Hausfeld, the manager of the law firm Hausfeld LLP, which represents the petitioners, told NRK.

The same petitioners previously filed a legal complaint with the UN in September against France, Germany, Brazil, Argentina, and Turkey for not doing their share in tackling climate change. Their latest mission coincides with the UN’s climate summit in Madrid. Thunberg arrived last week from the US, where she held her trademark “How dare you” speech, accusing politicians of steeling “her childhood and her dreams”. Thunberg, a 16-year-old schoolgirl, took a sabbatical to spread her message of imminent climate change. Since she shuns aeroplanes due to their carbon footprint, so Thunberg had to undertake a sea voyage.

It’s not the first time Thunberg has picked on Norway and Canada. In October, she slammed the Scandinavian country's emissions record and even rejected the Nordic Council Environment Prize, blaming Norway's oil policies as one of the reasons. During her trip to the Americas, Thunberg joined a climate rally in Alberta, Canada's energy heartland, calling for more strenuous climate action. Greta's activism earned her a mural in Edmonton, Canada, which was later defaced with pro-oil messages and French slurs.

It looks so much better now - definitely the talking point we had hoped for 👍 pic.twitter.com/aJZrZMJdbH

​Having surpassed Qatar in 2017, Norway is the world's second-largest exporter of natural gas behind only Russia, and one of Europe's largest oil exporters as well. The oil and gas industry accounts for about a fourth of the country's GDP, total investments, and state revenues.

Canada has the world’s third-biggest proven oil reserves and is the fifth-largest producer of natural gas and crude oil in the world. The production and delivery of oil products and natural gas contributes just under 10 percent of Canada's GDP.

000000
Popular comments
One question, why isn’t this kid in school instead of babbling about things she has absolutely no clue about? It’s a shame that the deep state can’t even let children be children anymore but uses them in their propaganda for the “global warming” scam.