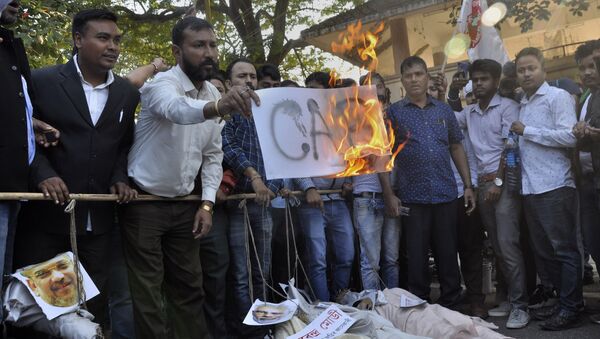 The controversial Citizenship Amendment Bill, which aims at granting citizenship to non-Muslim minorities from Bangladesh, Pakistan, and Afghanistan who settled in the country before 2015, was first introduced in 2016, but was abandoned soon after the protests that followed. The bill was proposed again by Indian Home Minister Amit Shah in 2019.

On Monday, hundreds of demonstrators took to the streets in the northeastern state of Assam blocking roads, burning tyres and covering walls with slogans against the bill.

Massive protests against CAB in Assam & across India.

BJP leaders are the new Britishers trying to Divide & Rule

Students called for a day-long shutdown in four Assam's districts. The protests have led to the closing of shops, banks, universities and businesses, with public transport staying off the roads.

"We will fight and oppose the bill till the last drop of our blood", All Assam Students' Union advisor Samujjal Bhattacharya said in an interview with Reuters.

Hundreds of people marched against the proposed law in Gujarat and the city of Kolkata.

Earlier in December, the lower house of the Indian Parliament passed the Citizenship Amendment Bill, which was introduced by Home Minister Amit Shah, with 311 votes in favour and only 80 against.

Amit Shah has underlined that the legislation does not concern Indian Muslims and added that parties should not oppose the legislation in the upper house, as it will protect the people of six minorities - Hindus, Parsis, Christians, Buddhists, Sikhs, and Jains - from Bangladesh, Pakistan and Afghanistan who come to India due to persecution in order to preserve their religious freedom and protect the honour of the women of their family.

"The Citizenship Amendment Bill wouldn't have been needed if the Congress had not allowed partition on the basis of religion. It was the Congress that divided the country on religious lines, not us", he said.

Previously, opposition parties and scholars voiced their concerns over the proposed legislation, claiming it stands against the basic principles of the Indian constitution.