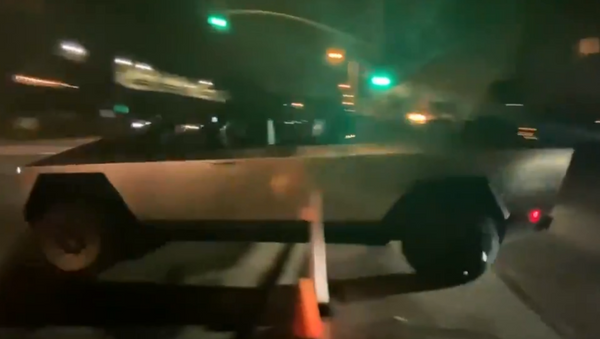 Tesla founder Elon Musk turned a few heads over the weekend after he was caught driving over a traffic pylon with the newly unveiled Cybertruck just moments after leaving Nobu, a popular Japanese restaurant located in Malibu, California.

Video of the mishap, which surfaced on social media Saturday and was published by TMZ, initially shows Musk in the driver’s seat, speaking with a few individuals in the parking lot before he’s seen driving off. Actor Edward Norton was reportedly one of the onlookers that approached Musk in the parking lot, according to CNBC.

However, things go south a bit after Musk ends up hitting a “right turn only” traffic sign when making a left turn out of the restaurant’s parking lot. According to the Business Insider, the traffic pylon was not an official road sign and appeared to have been placed by the restaurant’s management.

​The 25-second video eventually cuts off with Musk completing his left turn out of the parking lot, seemingly not to have noticed the traffic mishap.

Musk’s Cybertruck was also spotted on the Golden State’s 405 freeway later that day at about 11 p.m. by YouTuber Roberto Cruz, who managed to share footage he recorded of the sighting.

“The [Cybertruck looks] better in person,” Cruz wrote of the video. “It even has dual color, the silver on bottom and the [matte] black on top. Love it. Looks more amazing in person.”

Musk’s Saturday night outing came just one day after he was found not liable by a Los Angeles federal jury in a defamation case brought against him by Vernon Unsworth, a British cave explorer who helped in the rescue of several Thai schoolboys trapped in a cave. Unsworth argued that the Tesla founder had defamed his character after he fired off a tweet in 2018 referring to the diver as a “pedo guy.”