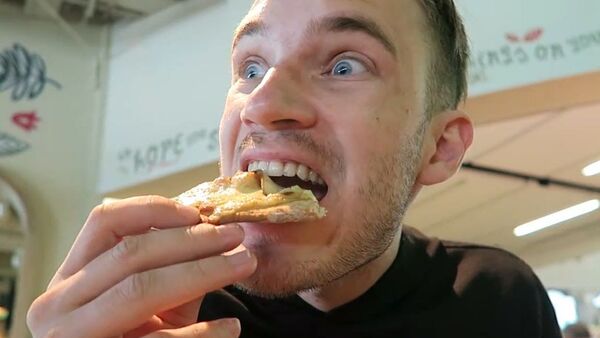 © Photo : PewDiePie channel
Subscribe
In the video the 30-year-old blogger, whose channel hit 100 million subscribers this summer, admitted that he couldn’t care less about certain things.

The King of YouTube PewDiePie has revealed things that he hates about the platform in his latest video. Pewds, also known as Felix Kjellberg, criticised everything – from bloggers and how they create their videos, to YouTube’s rules. "I just wanted to rant today about some stuff that I notice some YouTubers do that is weird”, he said.

He began his list of pet peeves with criticism of “YouTubers copying everyone else”, specifically the thumbnail style of another blogger SSSniper Wolf, who added a red strip in the preview to videos. “For whatever reason people think this is something worth replicating. This tiny bit of red in the background of the photo - that’s what gonna get you views apparently”, PewDiePie said before giggling.

Second on the list was YouTube’s policy of filling out description forms on videos. “I hate the description of videos, I don’t care about it”, the 30-year-old creator said and added that this feature annoys him, because it is not about the content but about how bloggers can optimise their videos so that people will watch them. PewDiePie also revealed that he was told by YouTube’s moderators to write better descriptions to his videos, but said he couldn’t “care less about it”.

Another thing that makes Pewds go ballistic is videos that have questions in the title and are about a topic that Pewds cannot give less s*** about.

At the end of the video PewDiePie criticised bloggers for repetitive promotion of the mobile game Raid: Shadow Legends. "I'm not gonna hate on people for getting bread on YouTube. But for f**k's sake, stop! It's the same script for everyone”, he said.

Pewds has recently delighted his followers by showcasing his new merchandise – the first batch, for some weird reason featured Russian profanities, while the second batch of merch was Christmas-themed and done together with the company Ugly Christmas Sweaters.