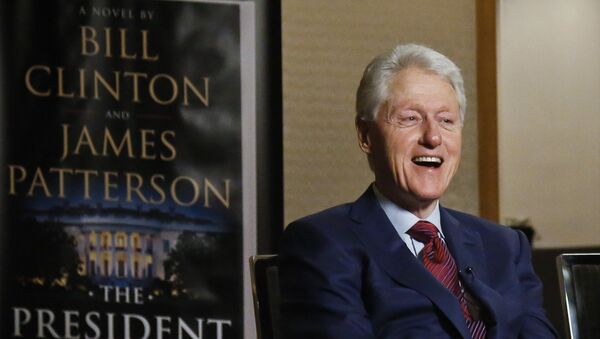 © AP Photo / Bebeto Matthews
Subscribe
Although the disgraced financier and convicted paedophile, rumoured to have had a lot of friends in high places, killed himself in prison this summer while awaiting trial on charges of sex trafficking, the scandal is far from being over. A former US president is among those public figures affected by the outcry.

The co-pilot of financier Jeffrey Epstein’s private plane, dubbed the “Lolita express”, told private investigator Mike Fisten that Bill Clinton flew on his jet "numerous times”. The sleuth hired in 2009 by Brad Edwards, an attorney for Epstein’s victims, told Jesse Watters on "Watters' World" that the former US president used it 26 times.

"Hillary [Clinton] never flew on the plane - that we knew of. She was never recorded going on the plane and no one’s ever seen her on the plane. [Chelsea Clinton] was never with him”, he recalled his conversation with the co-pilot.

Fisten, a former Miami-Dade police officer, also revealed other peculiarities that he claims he has learned about the jet from the co-pilot.

He allegedly told the investigator he flew the financier "all over the world", alleging his passenger hired very young stewardesses, who looked like minors according to him and were to wear outfits resembling "candy stripers”, he claimed. The jet is also said to have had "bedrooms" in the back although the insider was not allowed to leave the cockpit during flights and did not know what went on there.

As Fisten told the journalist, the witness was reluctant to talk to him even when he visited him at his upscale Florida home.

"I’ll never forget sitting in this guy’s living room up in this really nice area of Wellington, Florida, and talking to him. And he’s telling me, 'I can’t tell you anything. I really want to, but I can’t’. I said, ‘Look at your daughters. They could have been victims’”, the sleuth recalled how he talked the co-pilot into revealing the details about his boss.

Incidentally, Epstein’s first pilot, described as “his most dedicated pilot”, refused to talk to investigators.

According to the Daily Mail, Clinton and the convicted paedophile were once close, and Epstein even had a strange painting of the president wearing a female dress, lounging on a chair. The portrait was said to have been in Epstein’s New York residence. Additionally, a security systems expert, Jared Kellogg, has claimed that former US President Bill Clinton, his wife Hillary, and their daughter were frequent visitors to the New Mexico ranch of Jeffery Epstein, per the Daily Mail.

Clinton’s press office earlier refuted that he had visited any of Epstein's residences, except once at the latter’s apartment in New York City.

Worker Claims the Clintons Visited Epstein's Ranch in New Mexico - Report
Epstein, who also rubbed shoulders with Donald Trump and was friends with Prince Andrew, was arrested in July for allegedly trafficking underage girls at his mansion for sex. He pleaded not guilty to all charges against him. If convicted, he could have faced up to 45 years in jail. However, he died on 10 August at the Metropolitan Correctional Centre in New York. The official cause of his death was suicide, but this has been widely disputed by forensic experts and others. Recently, two prison guards were charged with conspiracy and falsifying records in connection with Epstein's suicide.

In 2008, before this latest scandal, he was sentenced after being convicted as a sex offender and paedophile. Epstein served a light sentence of just 13 months.

000000
Popular comments
Nothing will ever come of these criminal cabal of murdering Clinton c**ts. When in the deep state of UNTOUCHABLES is involved, all persecution is exempt including these pieces of s**t!!! Hopefully when they go down, it will not be by a grace of god for their redemption but a sacrilege for their past crimes!!!