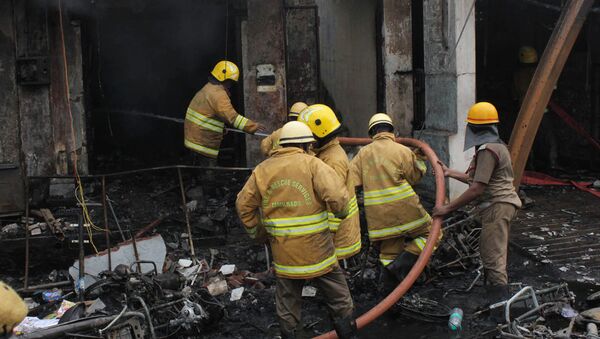 According to India Today, rescue and fire department officials have rescued some 50 people, with the Delhi police confirming the huge death toll on Sunday morning.

A massive blaze at a factory in New Delhi's Anaj Mandi district claimed at least 43 lives on Sunday morning, police reported. Some 50 people are believed to have been injured and rushed to 4 hospitals in the Indian capital.

A rescue operation is underway, as even more people are feared to be trapped in the building.

According to local media reports, the fire broke out in an "illegal plastic factory running inside a house", and quickly spread, engulfing two other houses.

#Delhi: 35 dead in a fire in Aman Mandi, Delhi. Such a painful news to wake up to! This is the second biggest fire tragedy after the Uphar Cinema one in Delhi.@ArvindKejriwal @msisodia @AamAadmiParty pic.twitter.com/8k7oVqrCEd

In the meantime, firemen on the scene told a Sputnik correspondent that the dead and injured include 65 people and the toll may rise. They added that a short circuit is believed to have caused the fire in the early morning hours.

Meanwhile, hundreds of shocked people have gathered at the site and dozens of ambulances and fire engines were pressed into service. By 10:00 a.m. the rescue operation was over and the fire extinguished.

According to The Times of India, most of the casualties were workers sleeping inside the facility after the flames erupted. The owner of the building, meanwhile, has been detained by the authorities.

Indian Prime Minister Narendra Modi has expressed his condolences to the families of the victims.

"The fire in Delhi's Anaj Mandi on Rani Jhansi Road is extremely horrific. My thoughts are with those who lost their loved ones. Wishing the injured a quick recovery. Authorities are providing all possible assistance at the site of the tragedy", he wrote on Twitter.

Other members of the government also commented on the fire. In the meantime, the owner of the building was detained by the authorities.

Tragic loss of precious lives in the fire accident in New Delhi. My deepest condolences with families of those who have lost their loved ones. I pray for the early recovery of the injured.

Have instructed concerned authorities to provide all possible assistance on urgent basis.

Delhi state chief Arvind Kejriwal has announced a magisterial inquiry into the Delhi fire, adding that the authorities will provide compensation in the amount of 1 million rupees (about $14,000) for the families of the dead and 100,000 rupees (about $1,400) for the wounded.

Reports coming in of several lives lost in a fire at Anaj Mandi in Rani Jhansi Road of Delhi. Grievous and heart-wrenching. #Fire #Delhi