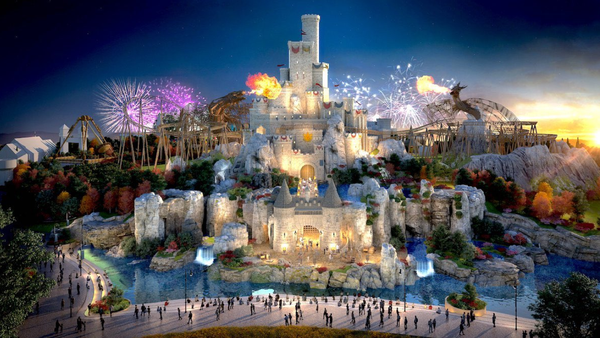 The project is expected to be the first European development of its kind to contend with Disneyland Paris, which opened in 1992.

Photos of the gigantic European amusement park, which is under construction in the UK, were released on Saturday, fascinating users across the web. The park is already deemed a Nationally Significant Infrastructure Project (NSIP) and construction is slated to start in 2021.

The London Resort is a grand £3.5 billion ($4.6 billion) project set to be opened in 2024 in Kent, and will cover an area of 535 acres (over 216 hectares). The park consists of six large parts: The Jungle, The Isles, The Kingdom, The Woods, The Studio, and The Starport, connected by High Street, which will be full of hotels, shops, and restaurants.

New pictures show plans for £3.5 billion 'UK Disney World' theme park, set to open in the South East in 2024. The London Resort theme park will cover the size of 136 Wembley Stadiums and have different worlds including The Woods, The Jungle and The Kingdom. pic.twitter.com/WdCZfvHOXk

​"We are creating a first-class theme park. A destination that maximises all the new, immersive and interactive technologies and experiences in the world", said P.Y. Gerbeau, chief executive of London Resort Company Holdings. "But we won't just be creating a world-class leisure destination, it will also be one of the most sustainable theme parks on the planet".

According to preliminary estimates, the facility will be able to attract around 50,000 guests daily. It will take only a 17-minute train ride from London's St Pancras station and the park will also be connected with Paris and Brussels.

The company previously announced a partnership with the BBC, ITV Studios, and, most recently, Paramount Pictures, whose properties will have rides and attractions at the facility.