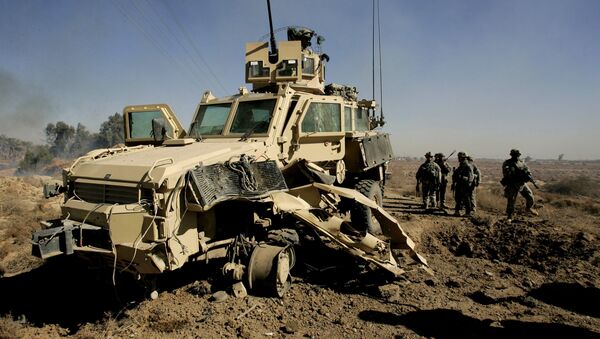 A lawsuit unsealed Wednesday alleges vehicle maker Navistar defrauded the US government of at least $1.28 billion by forging invoices, catalog prices and other data in deals to make Mine Resistant, Ambush-Protected (MRAP) trucks for the US military.

The US government has intervened in a six-year-old qui tam complaint filed by a whistleblower from Navistar Defense, which alleges under the False Claims Act that the company “used false and misleading documents to support alleged ‘commercial prices’ of vehicle components, including the chassis, engines, and suspension systems,” according to a Wednesday press release by Sanford Heisler Sharp, the legal firm representing the whistleblower.

“The forged and fraudulent documents allegedly served to mask that these vehicle components either had no commercial sales history at all or, when they did, had commercial prices amounting to approximately half the price that Defendants charged the Government,” the statement continues.

Duquoin Burgess, a contractor who worked in Navistar Defense’s contract management department from 2009 until October 2012, filed the complaint after witnessing the alleged practices firsthand.

Burgess’ attorney, Vince McKnight, told Defense News that knowledge of the alleged fraudulent activities went right to the top, including Navistar executives and its president at the time, Archie Massicotte.

“The Department of Justice will hold accountable those contractors who falsify information and thereby cause the military to pay inflated prices,” Assistant Attorney General Jody Hunt for the Civil Division said in a Wednesday US Department of Justice statement announcing the federal government’s intervention in the case. “We will take steps necessary to protect the military’s procurement process from abuse.”

“Through rigorous enforcement of the False Claims Act, we protect taxpayer dollars from waste, fraud, and abuse,” US Attorney Jessie K. Liu for the District of Columbia said in the release.  “We expect the utmost integrity and reliability from the contractors that design and build equipment that is meant to ensure that our men and women in uniform are adequately protected as they serve our country.”

In 2003, Navistar’s then-president, Dan Ustian, announced a spinoff company, Navistar Defense, was being created to market vehicles to the Pentagon, with Massicotte chosen to lead the new endeavor. The move was regarded by some analysts as financially questionable, even as MRAP sales ballooned to 27% of Navistar’s total income by 2007 amid the continuing US war in Iraq, which created a demand for US military vehicles resistant to improvised explosive devices (IEDs).

"Navistar came out of nowhere and became a big player with MRAP, in what was a short-term program," Dean Lockwood, an analyst at defense consultant Forecast International, told Chicago Business at the time. "They didn't prove themselves to be a long-term major player."

During the period from 2007 to 2012 in which Navistar supplied MRAPs to the Pentagon, it collected nearly $9 billion in contracts. By 2009, however, Navistar Defense had begun losing MRAP contracts to Oshkosh Corporation, which supplied a lighter version of the vehicle.

Forbes reported in 2012 that Ustian abruptly stepped down as Navistar International’s president after his ambitious $700 million plan to cut corners in meeting Environmental Protection Agency emissions requirements with a diesel exhaust gas recirculation system on the company’s trucks backfired. By the time he left in August 2012, Navistar’s stock market value had halved, and two rounds of terminations followed his departure.

This past May, Navistar paid out $159 million to settle a federal lawsuit by truckers who bought vehicles with the faulty exhaust systems between 2010 and 2013. The Wall Street Journal noted Navistar has lost more than $2 billion in warranty claims, engine retrofits and buybacks as a result of the mishap.

Demand for MRAPs was heavy as casualties increased; in 2007, the Department of Defense spent $50 billion on 27,000 MRAPs from various suppliers, paid for by an emergency budget. The lawsuit alleges Navistar took advantage of this urgency to force concessions from the Pentagon, which granted a special waiver in 2008 so that the company wouldn’t have to provide cost data from suppliers. Navistar argued it was unaccustomed to doing so as primarily a commercial outfit, and that if required, it would delay delivery of the sorely needed MRAPs.

Defense News, which viewed the complaint, reported that not only Burgess, but his predecessor, Linda DiToro, both refused to sign the certifications for cost and pricing data required by the waiver until threatened with replacement by higher-ups.

According to the outlet, some of the items allegedly overpriced were the chasses, engines and suspension systems, for all of which Navistar Defense hugely inflated the prices or invented the sales histories out of whole cloth.

“We believe our pricing was fair, reasonable and competitive, and we are disappointed the government has chosen to intervene in this matter,” Navistar spokesperson Lyndi McMillan told Bloomberg in a Wednesday statement. “The company intends to defend itself as necessary and appropriate.”