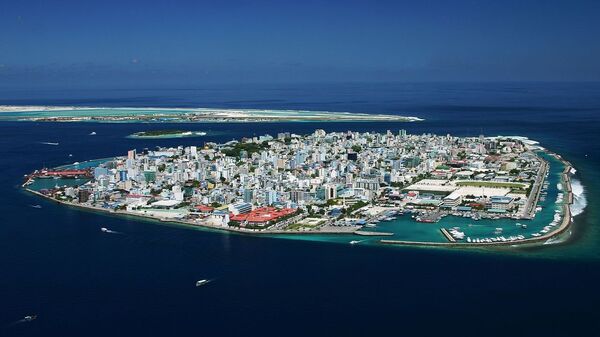 New Delhi (Sputnik): The Maldives is stuck in the middle of a power battle between India and China as both seek to ensure their dominance over the crucial shipping lanes in the Indian Ocean. Beijing invested millions of dollars in the country during the rule of former leader Abdulla Yameen as part of Beijing's Belt and Road plan.

The Maldivian Foreign Ministry has categorically rejected an Associated Press report that claims that Male will seek to restructure the $1.4 billion-debt that it owes to China.

The Associated Press on Thursday reported that Maldivian Foreign Minister Abdulla Shahid claimed that Male is in contact with Beijing to restructure its massive debt to China.

“The ministry would like to clarify that Minister Abdulla Shahid in his interview with AP did not state that Maldives wants to "restructure" its debt to China,” the Maldivian foreign ministry clarified on Friday.

Ministry would like to clarify that Minister @abdulla_shahid in his interview with AP did not state that Maldives wants to "restructure" its debt to China. He did speak about the reckless and irresponsible borrowings of the former regime.

​The report came as Shahid was visiting Sri Lanka to meet the newly-elected President Gotabaya Rajapaksa and Prime Minister Mahinda Rajapaksa on Thursday.

Reacting to the AP report, the Malidivian foreign ministry confirmed that Shahid did speak about the “reckless and irresponsible borrowings of the former regime.”

China approved loans to Male for several infrastructure projects under the previous government led by Abdullah Yameen, funding funded housing projects, a bridge connecting the airport island with the capital island, Male, and some state-owned enterprises.

The foreign ministry expressed its confidence that the “Maldives-China relationship is strong and vibrant enough to allow for discussions on all matters of mutual interest and it hoped to see the relationship grow to new heights during President Ibrahim Mohamed Solih’s administration.

Earlier this week, Indian Prime Minister Narendra Modi announced a slew of projects for the Maldives as well as plans to boost defence co-operation. One project involves lighting up Male using LED lights. Another sees the launch of the RuPay card in the Maldives. Meanwhile, three fish processing plants have been opened, and India has gifted Male a customs speedboat.