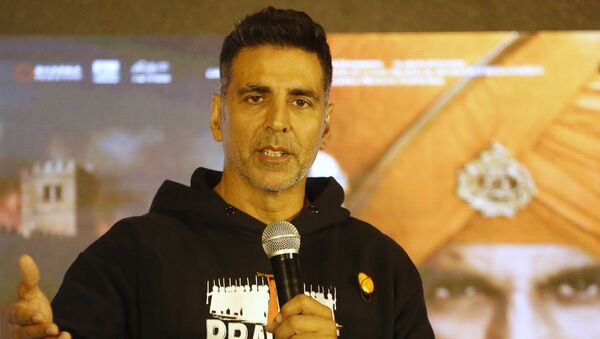 New Delhi (Sputnik): Ranked as world’s fourth highest-paid actor, Bollywood superstar Akshay has been working in the Indian film industry for over three decades. Despite being famous for appearing in patriotic and socially relevant cinema, he has been incessantly trolled for taking Canadian citizenship.

Bollywood superstar Akshay Kumar, known for his movies full of nationalist fervour, says it is hurtful to him that he cannot prove his nationalist allegiance towards India, given that he holds a Canadian passport.

During an event in Delhi, Akshay disclosed that he has applied for an Indian passport and will soon have one.

“I have now applied for the passport. I am an Indian and it hurts me that I am asked to prove that every time. My wife, my children are Indian. I pay my taxes here. Unfortunately, I get mocked over my citizenship,” said Kumar.

Kumar’s citizenship of Canada came to light few years back and he usually has to face the flack of critics for talking of nationalist issues, while having opted for Canadian citizenship himself.

Responding to the criticism, Kumar said that his decision to get a Canadian passport was taken in the late 1990s when several of his films flopped and he was looking to migrate to Canada to work.

“I felt my career was over and I won’t get more work here. But my 15th film worked and I never looked back. I never thought of changing my passport,” he revealed.

Off the screen also, Kumar has also been vocal in his support of diverse causes.

In 2017, he launched a website and mobile application called Bharat Ke Veer (India’s Bravehearts), which enables people to donate to families of army personnel. He has also posted videos advocating self-defence for women, among other social initiatives. He also had the opportunity to interview Indian Prime Minister Narendra Modi.