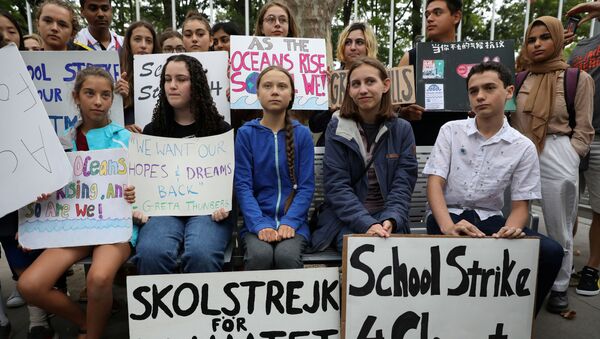 Students at Apalløkka school in Oslo have been encouraged to take part in a fictitious climate demonstration in connection with a commercial filming, the news outlet Resett reported.

According to Resett, an email from the school's headmaster was sent to the parents of Apalløkka ninth-graders earlier this week. In the email, parents are informed that the school leadership has agreed to cooperate with KLP, Norway's largest insurance company, on their ad.

Parents were informed that 150 youngsters are needed for the recording, which takes place during school hours. The amateur actors would have to form a large demonstration for the climate issue. A fee was also promised for a future class trip.

​The headmaster's encouraging tone sparked parental concern. Some interpreted the leadership's decision to allow the shooting during school hours as a green light for teenagers to skip school under the banner of the climate movement.

“It feels a bit like using the kids to make money and justifying it with a good cause,” a concerned parent wishing to remain anonymous told Resett. “I think there is something political the school wants to express here, through the students. My question to the school is: Would one have participated in this if the demonstration was a recording where the students pretended to be for Donald Trump?” the person asked rhetorically.

According to some parents, the school encourages climate activism.

“I don't want my child to be part of paid climate activism in a commercial, but I feel I am expected to say yes,” a concerned parent said, citing group pressure.

Since the climate issue is politically charged, it also raises ethical questions, such as the whether it is compatible to take the kids to earn money by way of a campaign that purports to stand for “everything that's more important than money”, Resett argued.

“Here, the pupils are taken out of school to protest for climate directed by adults, even though it is a commercial film. It reinforces the Greta Thunberg phenomenon,” the parent said.

16-year-old Swedish activist Greta Thunberg, a  teenage girl with a piercing stare and psychological issues who rose to international stardom through her one-person “school strikes”, is seen by many as an instance of a child being utilised to push through a certain agenda, who serves the purpose of making it more palatable for society.

Greta Thunberg recently co-signed an Op-Ed, which pinned the perceived climate change on “colonial, racist, and patriarchal systems of oppression”, which, the authors claimed, need to be dismantled in order to save the planet. The overt use of left-wing rhetoric and talking points was widely interpreted as the allegedly apolitical movement going fully political.

“Greta's mask slips, the climate crisis is not just about climate/environment: “It is a crisis of human rights, of justice and of political will. Colonial, racist, and patriarchal systems of oppression have created and fuelled it.”

Greta tappar masken, klimatkrisen handlar inte bara om klimatet/mijön: "It is a crisis of human rights, of justice and of political will. Colonial, racist, and patriarchal systems of oppression have created and fuelled it"https://t.co/sSD9SMkAiI pic.twitter.com/xYm5YQeBh0