Alleged Killer Says Murder of Boy, 14, in London Street Was ‘Disgusting’ but Claims He is Innocent 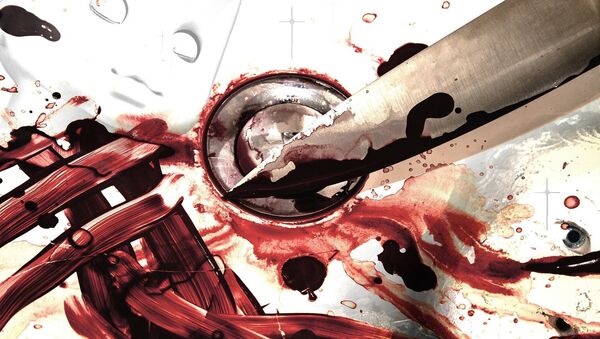 CC0 / /
Subscribe
Knife crime has become an epidemic in Britain in recent years and 23 teenagers have been stabbed to death in London this year. Jaden Moodie, who was only 14, was killed in January 2019 while dealing drugs in Leyton, east London.

A teenager accused of hunting down a 14-year-old boy, who was knocked off a moped by a car and then stabbed nine times in the street, has described the crime as “disgusting”.

But Ayoub Majdouline, 19, denies he was one of Jaden Moodie’s killers and insisted someone had stolen his clothes from a drugs safe house to wear on the night of the murder.

Last week a jury at the Old Bailey in London was shown CCTV footage of the moment when a stolen Mercedes was deliberately rammed into a moped ridden by Jaden, who was then attacked by the occupants of the car.

Jaden’s relatives gasped and left in tears as the clip was shown to the courtroom.

An eye witness says he saw a gang “stomping & stamping” on a 14 year old boy who was stabbed to death in London earlier this year. Jaden Moodie was targeted while on a moped in Leyton. Ayoub Majdouline, who’s 19 & from north London, denies murder & possessing knife at Old Bailey.

​Oliver Glasgow QC, prosecuting, said Jaden Moodie was associated with a gang in Leyton called the Beaumont Crew, who were also known as Let’s Get Rich, and was dealing drugs for them on the night he died.

Mr Glasgow said Jaden was targeted by Majdouline and other members of a rival gang, known as the Mali Boys.

​The schoolboy bled to death in the street after being stabbed nine times.

Majdouline denies murder and possessing an offensive weapon and on Thursday, 5 December, he entered the witness box and gave his account of events on the night of 8 January 2019.

Majdouline - whose father is Moroccan - admitted he was associated with the Mali Boys but he insisted he only sold drugs for them and claimed he had no interest in violence against other gangs.

Defence barrister James Scobie QC tells the Jaden Moodie murder trial there was "no dispute that Jaden was a defenceless victim" but he added: "However the defence case is that Ayoub Majdouline was not in the Mercedes that night." The trial continues.

​On Friday, 6 December, Majdouline returned to the witness box to be cross examined by Mr Glasgow.

The prosecution allege Majdouline was “Suspect Two” - who had been the front seat passenger in the Mercedes - and was wearing distinctive yellow rubber gloves, as well as a black leather jacket and blue jeans.

'Someone Stole My Clothes'

The clothes, which contained Majdouline’s DNA, were found burned in a nearby graveyard after the killing. Majdouline has admitted they were his clothes and gloves but said someone had stolen them from a drugs safe house where he had left them earlier in the day.

Mr Glasgow said: “You say someone took your clothes? Someone who can fit into your jeans and your jacket, someone the same size as you?”

“Yes, I don’t know whether they’re the same size as me,” replied Majdouline.

Mr Glasgow said: “They thought I will wear those clothes while I’m committing a murder but they also took your rubber gloves?”

“Ayoub Majdouline was the yellow gloved attacker who was part of a gang who had set out to attack their rival and who ended up murdering Jaden Moodie,” - Oliver Glasgow QC.

​Majdouline said he did not know why the killer had taken his clothes but he said: “I had spare clothes. So why would I wear clothes that I had been wearing all day and had been seen on camera, rather than my spare clothes? It doesn’t make any sense.”

Mr Glasgow said: “You went out looking for a rival, someone from the Beaumont Crew.”

“No I didn’t. I wasn’t involved in the attack…I don’t know Jaden, I don’t do anything for the gang, all I do is sell drugs for them,” replied Majdouline.

Mr Glasgow said: “You carry a knife don’t you?”

“Yes, to protect myself from getting robbed,” he replied.

Mr Glasgow then asked him about his reaction after being arrested by police and shown CCTV of the attack on Jaden.

“Did you think to yourself that looks a bit like my jacket that went missing?” asked Mr Glasgow.

“When you realised your missing jacket was being worn by one of Jaden’s killers did you think you better tell the police?” asked Mr Glasgow.

Majdouline said he took his solicitor’s advice to answer “no comment” to all the police’s questions.

Mr Glasgow then went into detail about the attack on Jaden and said: “It looks like those people wanted to kill him, didn’t it?”

Majdouline replied: “It looks disgusting, what they have done.”

Mr Glasgow said: “He was butchered by you and your friends.”

“It wasn’t me and my friends. I wasn’t involved in this attack. I don’t know Jaden. I’m not involved in a gang. I’ve never stabbed anyone in my life. Why would I stab a 14-year-old boy?” replied Majdouline.

Victim Was 'Child on a Moped'

Mr Glasgow pointed out Jaden had been “basically a child on a moped” who was killed.

Majdouline replied: “It’s disgusting, what they done but I didn’t do it. I’m not involved in gang violence.”

Later, being re-examined by his defence counsel, James Scobie QC, Majdouline said he wore the rubber gloves when bagging up large consignments of drugs because he did not want to leave his DNA on them because he would be prosecuted for possession with intent to supply.

Mr Scobie asked him: “Have you told the jury the truth?”

Mr Scobie asked: “Did you have any reason to attack anyone that night?”

“No I had no reason whatsoever. I could never do something like that,” he replied.