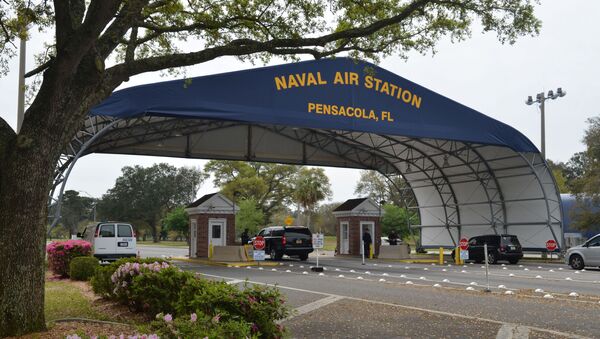 The shooting comes just two days after a gunman killed two civilians and injured a third at the Joint Base Pearl Harbor-Hickam, Hawaii, before taking his life.

The suspected gunman who killed three people before being shot dead at a Naval base in the state of Florida was a Saudi aviation trainee, a US Navy Southeast Region spokesperson confirmed on Friday.

"Yes, that's correct," the spokesperson said when asked to confirm reports that the suspected shooter was a Saudi trainee.

Earlier, the Associated Press reported, citing an anonymous US official that the suspected shooter was identified as a Saudi aviation student, adding that the authorities were investigating whether the attack at the Naval Air Station in Pensacola, Florida was linked to terrorism.

The gunman in the attack opened fire in a classroom at the base, where military from around the world attend training courses, killing three people before being shot dead by police.

Just received a full briefing on the tragic shooting at NAS Pensacola in Florida, and spoke to @GovRonDeSantis. My thoughts and prayers are with the victims and their families during this difficult time. We are continuing to monitor the situation as the investigation is ongoing.

​Earlier in the day, media reports emerged saying that an active shooter situation occurred a naval base in Florida. The administration of the naval base turned to Facebook to inform that the access gates of the base had been closed.

ABC News reported citing spokesperson for Baptist Hospital that nine patients have been admitted to the hospital, while six patients were taken to the trauma centre at Ascension Sacred Heart Hospital.

BREAKING: Active shooter reported at Naval Air Station Pensacola in Florida. There are reports of at least 10 casualties. Officials are asking people to stay away from the base. Law enforcement is trying to eliminate the threat. https://t.co/HTETUGccDS pic.twitter.com/sRkZPboq3C

​Three medical helicopters and several military ambulances have been deployed at the scene of the incident.

The White House has contacted the city of Pensacola in Florida to offer assistance after a shooting at a Navy base left four people including the gunman dead, local mayor Grover Robinson told reporters on Friday.

“The governor’s office and the White House have contacted us, the city of Pensacola … and said any assets that they have would be available to us,” the mayor said in a press conference.

He added that the municipality was assessing its needs and would inform state and federal authorities of any assistance it required.