We Will Win as Dems Seek to Impeach Me Over Nothing, Trump Says 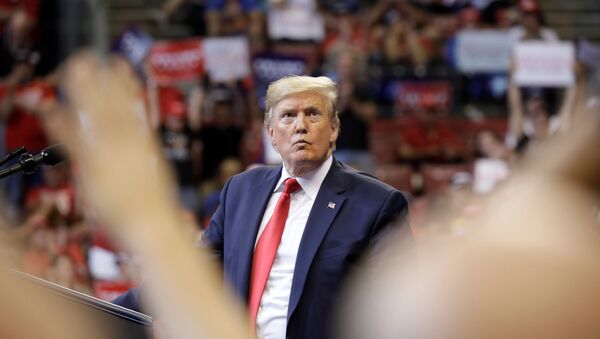 Oleg Burunov
All materialsWrite to the author
Earlier on Thursday, Speaker Nancy Pelosi announced that she had instructed the House Judiciary panel to draw up articles of impeachment against Donald Trump, following allegations that the US President prevailed upon his Ukrainian counterpart Volodymyr Zelensky to launch a probe into Trump's potential 2020 rival, Democratic Senator Joe Biden.

US President Donald Trump pledged on Thursday that he would get the better of Democrats because they "seek to impeach him over nothing".

The fresh tweet came after Trump urged "the Do Nothing Democrats to impeach him now" after they had a "historically bad day yesterday in the House".

....This will mean that the beyond important and seldom used act of Impeachment will be used routinely to attack future Presidents. That is not what our Founders had in mind. The good thing is that the Republicans have NEVER been more united. We will win!

​The remarks come after Speaker Nancy Pelosi announced earlier on Thursday that she has instructed the House Judiciary panel to draw up articles of impeachment on Trump, claiming that he “has engaged in abuse of power, undermining our national security and jeopardising the integrity of our country.

White House spokeswoman Stephanie Grisham berated Pelosi for the comments, apparently indicating that the Trump administration is quite realistic about the outcome of an imminent House vote on the articles of impeachment, and saying that the Republicans “look forward to a fair trial in the Senate”.

.....trial in the Senate, and so that our Country can get back to business. We will have Schiff, the Bidens, Pelosi and many more testify, and will reveal, for the first time, how corrupt our system really is. I was elected to “Clean the Swamp,” and that’s what I am doing!

This followed the first public hearing by the House Judiciary Committee, during which the three constitutional law experts picked by Democrats described Trump’s actions in the Ukraine scandal as an impeachable offence.

Witness Michael Gerhardt, a law professor with the University of North Carolina, claimed that “if Congress fails to impeach here, then the impeachment process has lost all meaning and, along with that, our constitution’s carefully crafted safeguards against the establishment of a king on American soil.”

The Republican witness made the case that the Democrats were rushing ahead with their charges and that they failed to provide evidence of Trump's wrongdoing.

House Democrats, who launched an impeachment probe in late September, allege that during a phone talk with Ukraine President Volodymyr Zelensky in summer, Trump pressed him to open a probe into former Vice President and 2020 Democratic presidential hopeful Joe Biden by withholding nearly $400 million in US military aid.

Republicans deny the claims, pointing to the release of the cash several weeks prior to a July 25 request by Trump, even though Ukraine never launched a Biden investigation.

Trump declassified what the White House claims is the full, unedited transcript of his telephone call with Zelensky. The president denied wrongdoing in his dealings with Ukraine, describing the impeachment inquiry as a political "witch hunt" by Democrats aimed at reversing the outcome of the 2016 US presidential election.

000000
Popular comments
He is corrupted to the bone lock him up.

No neck tony
5 December 2019, 18:45 GMT8
000000
Positive self-serving thinking Trump....! But the fact remains the Impeachment will go on your resume and in US history books for future youth students learning...Now you have a choice: submit your resignation and stop the impeachment process, Or continue as president and face the stain on your records...!!!