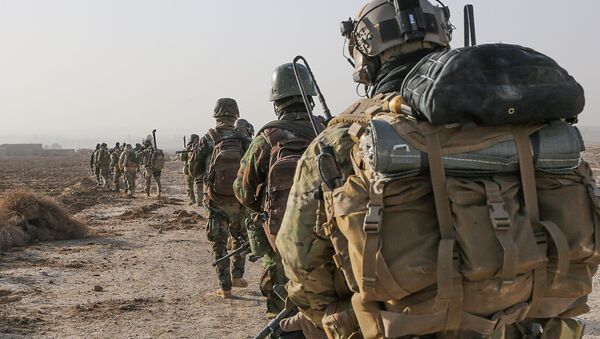 CC0 / /
Subscribe
The Wall Street Journal broke the news earlier, citing sources that the US Department of Defence (DoD) was considering to authorize the deployment of additional 14,000 troops to the Middle East along with various military hardware to deter alleged Iranian threat in the region - the news which was later denied by DoD spokesperson.

The Pentagon, nevertheless, still reportedly has plans to build up its US military presence in the Middle East, Fox News reported Thursday, citing two US defence officials familiar with the matter.

According to the sources, cited by the US broadcaster, Defence Secretary Mark Esper has “not made any decision” but the plan reportedly envisages the deployment of up to 7,000 additional soldiers to the Middle East to counter what they claim to be an alleged threat from Tehran.

Late on Wednesday, The New York Times reported, citing US intelligence sources, that Iran had allegedly taken advantage of the ongoing protests in Iraq to stockpile short-range ballistic missiles in the neighboring country - a move treated as potentially dangerous for US forces in the region. US military officials, cited by the NYT, refused to name certain types of Iranian rockets - allegedly smuggled and stockpiled in the hidden arsenal in Iraq - but they claim that these particular missiles are able to strike Israel, changing the balance of power in the region.

Since Spring, the DoD has reportedly deployed over 14,000 additional forces  - half aboard warships  - to the Middle East to join over 60,000 American troops currently stationed in a region referred to by the Pentagon as Central Command, an area stretching from Egypt through Afghanistan, Fox News said.

US Releases Photos of Seized 'Significant Cache' of Iran Missile Parts Headed to Yemen
In May, the US military ratcheted up its reinforcement in the Middle East on the one-year anniversary of the Trump administration's unilateral withdrawal from the 2015 Joint Comprehensive Plan of Actions (JCPOA), also known as Iran nuclear deal.

Tensions in the Persian Gulf rose further after mysterious attacks on oil tankers, including off the coast of the United Arab Emirates, as well as drone strikes on Saudi oil fields on 14 September. The Trump administration blamed Iran for the incidents. Tehran has denied any wrongdoing.