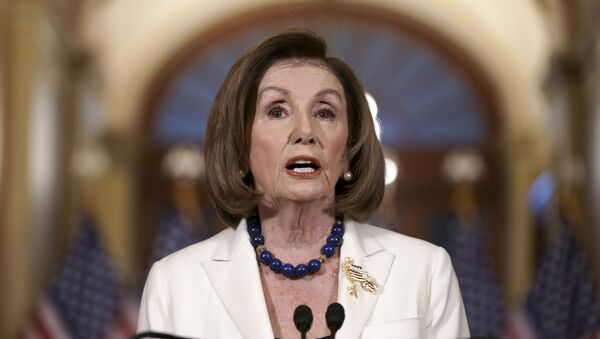 © AP Photo / J. Scott Applewhite
Subscribe
The statement by Pelosi marks another step in the Democrats' efforts to remove Donald Trump prior to the November 2020 election. The party is considering multiple articles of impeachment, including charges of abuse of power, bribery, and obstruction of Congress and justice.

Nancy Pelosi announced that she has instructed the House Judiciary panel to draw up articles of impeachment against President Donald Trump.

"The President has engaged in abuse of power, undermining our national security and jeopardising the integrity of our country," the House Speaker said in a statement.

"Sadly, but with confidence and humility, with allegiance to our founders and a heart full of love for America, today I am asking our [Judiciary Committee] chairman [Jerry Nadler] to proceed with articles of impeachment."

White House spokeswoman Stephanie Grisham issued a rebuke to Pelosi and her party following the statement. She appeared to indicate that the Trump administration is quite realistic about the outcome of an imminent House vote on the articles of impeachment, saying that the Republicans "look forward to a fair trial in the Senate."

.@SpeakerPelosi & the Democrats should be ashamed. @realDonaldTrump has done nothing but lead our country - resulting in a booming economy, more jobs & a stronger military, to name just a few of his major accomplishments. 🇺🇸 We look forward to a fair trial in the Senate.

It comes the day after the first public hearing by the House Judiciary Committee. At the hearing, the three constitutional law experts picked by Democrats described Trump’s actions in the Ukraine scandal as an impeachable offence. The Republican witness made the case that the Democrats were rushing ahead with their charges and that they failed to provide evidence of Trump's wrongdoing.

The US president is accused of soliciting personal favours from Ukraine; the Democrats believe he abused his presidential power and engaged in bribery when he held back $400 million in congresionally-approved military aid to Ukraine over the summer to press Kiev for an investigation into Joe Biden, the 2020 Democratic candidate.

The Democrats also accuse him of stonewalling their efforts to investigate the affair, which they say amounts to an obstruction of justice.

Several US diplomats have testified in public and closed-door hearings over the past two months that Trump specifically wanted Ukraine to publicly announce an inquiry into Biden, rather than actually launch it — backing up the Democrats' claims that he sought to smear his potential rival in the 2020 election.

Trump insists that there was no criminal wrongdoing on his part, and that his decision to withhold the funds was due to his concerns over corruption in Ukraine, a key US ally in Eastern Europe.

After the Judiciary panel frames the articles of impeachment, the House of Representatives is to vote on whether to remove Trump from office. The vote is expected to take place before Christmas. The matter then goes on to the Senate, which would hold a trial next year.