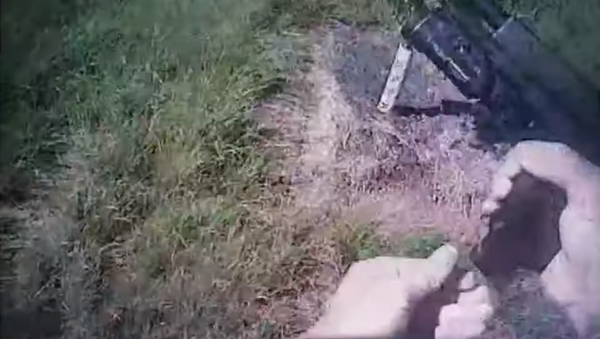 Released to the public on Wednesday, the graphic bodycam footage was captured on a device used by Ross Bays, a veteran police officer who joined the Ceres department in 2011 after spending some seven years with the Golden State’s Stanislaus County Sheriff’s Department.

The recording begins with Bays driving his K-9 patrol car in pursuit of a black Lexus which had sent officers on a chase that reached speeds of 105 mph on August 18, 2018. It’s at the released video’s five-minute timestamp that Bays is seen pulling up behind the vehicle and immediately jumping out of his patrol car to chase after Mendez, who appeared to stumble out of the Lexus.

Roughly three seconds after Bays stops his vehicle, he begins to discharge the entire magazine of his department-issued firearm toward Mendez. During this time, the officer fails to yell out any commands; in fact, the very first orders don’t come until after Bays reloads his weapon.

Calling in the shooting over the radio, Bays informs dispatch that there is one individual lying in the nearby orchard fields with a handgun. After again telling the four suspects to “stay on the ground” and to “look away from me,” he briefly turns his attention back to Mendez, who is still lying facedown on the ground.

“In the field - do not move. I will shoot you again. Do not move,” he quickly yells out before additional officers arrive on the scene.

The remainder of the footage goes on to show two other officers approach Mendez and place him in restraints before the four other suspects are placed in handcuffs. Several minutes go by before Bays is confronted by a responding officer regarding the events that unfolded at the scene.

During the questioning, Bays admits that he fired at the 15-year-old Mendez while he ran away from the scene, and that the teenager never returned fire at the officer. “I shot him,” Bays acknowledges after stating that he saw Mendez flee the vehicle with a handgun.

The recording cuts off after he’s told to stand down from the investigation and is seen relocating his K-9 to a different patrol unit on the scene. Mendez was later pronounced dead. An autopsy revealed that he was shot twice by Bays - once in the back and once on the upper portion of his right arm.

Police have indicated that officers directed their attention to the Lexus after receiving reports of someone in a black Lexus brandishing a handgun at a local area park. That individual was reported to be a young Latino wearing a black shirt and jeans, according to the Modesto Bee, which also reported that the police chase began after the vehicle was involved in a hit-and-run.

Although police did later find firearms inside the Lexus and an unloaded handgun several feet away from Mendez, the teenager did not match the description of the individual who brandished the firearm, as he was wearing a white top and red pants.

The video’s release comes after a $2.1 million civil settlement was reached between the city and Mendez’s family. After the shooting, Bays went on medical leave and has since relocated to Boise, Idaho, the San Francisco Chronicle reported. When reached out to by the Idaho Statesman, he declined to issue a statement, explaining that the police department has “a policy against me commenting because I am still a city employee.”

Although Ceres Police Chief Richard Collins informed the Modesto Bee that no violations of department policy have been found regarding the incident, an investigation by the Stanislaus County District Attorney’s Office and an internal probe by the Ceres Police Department are still pending in the matter.