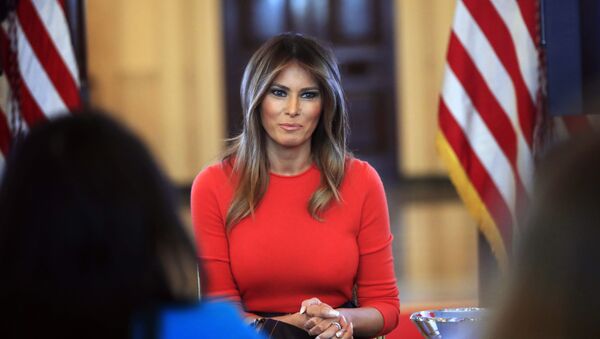 George Conway, husband of White House counselor Kellyanne Conway, has called out First Lady Melania Trump on Twitter over her criticism of an impeachment witness that brought up the name of her and President Trump’s son, Barron, during the Wednesday hearing.

Conway accused Melania Trump of amplifying comments made by Stanford Law School professor Pamela Karlan at the impeachment hearing, which he called a “nothingburger reference."

So therefore you’re amplifying what was a nothingburger reference a hundred-thousand-fold. Got it. https://t.co/MMSBhMWQE4

Earlier, Stanford Law School professor Pamela Karlan made a joke about Barron’s name when she criticized Trump’s conduct during her witness testimony in front of House Democrats.

As she claimed that Donald Trump had attempted to strong-arm a foreign leader into smearing one of his opponents as a means of winning the presidency in 2020, she said:

"Contrary to what President Trump has said, Article 2 does not give him the power to do anything he wants, and I'll just give you one example that shows you the difference between him and a king, which is the Constitution says there can be no titles of nobility, so while the president can name his son Barron, he can't make him a baron," Karlan said, cited by The Hill.

The First lady was swift to respond to this mocking reference to her son, criticizing Karlan on Twitter:

Karlan subsequently apologised for her comments after Rep. Matt Gaetz (R-Fla.), a President Trump ally, said the remarks made her “look mean” during the hearing.

"I want to apologize for what I said earlier about the president's son. It was wrong of me to do that," Karlan said. "I wish the president would apologise, obviously, for the things that he's done that's wrong, but I do regret having said that."

Karlan was testifying before the Judiciary Committee on Wednesday alongside three other legal scholars in the ongoing impeachment inquiry against President Trump.

On Wednesday the Democratic-led House Judiciary Committee held its first public hearing of the impeachment proceedings into Donald Trump.

The three expert witnesses called by Democrats described Trump's efforts to get Ukraine to open an investigation into the family of 2020 Democratic candidate Joe Biden as an impeachable offence.

The only witness called by Republicans, George Washington University law professor Jonathan Turley, argued that he didn't see any proof that Donald Trump broke a specific law related to the Ukraine affair, and that the president therefore should not be impeached.

With the Judiciary panel considering the articles of impeachment, a full House vote on whether Trump should be removed from office could happen before Christmas.

In September, House Democrats launched an impeachment inquiry based on a whistleblower complaint, which alleged that during a 25 July telephone conversation Trump asked Ukrainian President Volodymyr Zelensky to investigate the Bidens involvement in the firing of a Ukrainian prosecutor general who had been probing a gas firm in which Hunter Biden sat on the board.

The White House subsequently published what it claimed to be an unredacted transcript of the phone conversation, as Trump denied any wrongdoing and dubbed the probe another "witch hunt" against him.