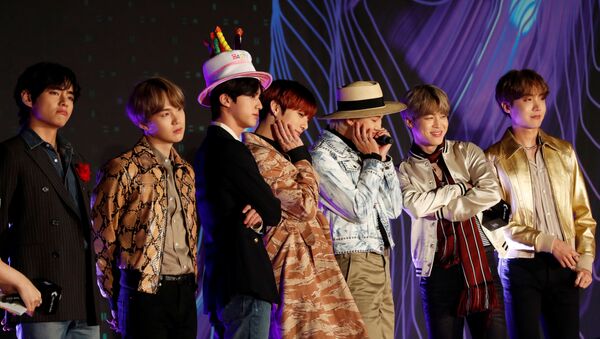 The Asian music awards show took place in Japan on December 4, the 21st in the gala's history.

The annual Mnet Asian Music Awards ceremony, organized by CJ E&M, through its music channel Mnet, took place at the Nagoya Dome in Japan this Wednesday.

The red carpet and main ceremony were broadcast worldwide via Mnet, SNS and other international networks, and was hosted for the third time since 2017 by well-known actor Park Bo Gum.

BTS closed the ceremony with a spectacular performance, including VCR, that left the fans of the group ecstatic.

#BTSMAMA2019 #BTSDaesangAllKill #BTSMAMASWEEP
You have created history once again today! We are all so proud of you! You are truly one of a kind! Every single one of you have created a legacy! Thank you Bts! I will love you forever 💖 pic.twitter.com/k4KktAAKpE

THE BEST FAMILY IN THE UNIVERSE 💜💜

The cuttest moment of the #MAMA2019 ❤️ Jimin and V#BTSatMAMA pic.twitter.com/bRTLtcREW1

WHEN THEY SAID ”I GOT YOU” AND JIMIN PULLED THAT ROSE OUT OF NOWHERE#JIMIN #V #VMIN pic.twitter.com/7ukJVzXtfS

Vmin: I breathe while looking at you, I got you , inside those pitch black lights . pic.twitter.com/X80upUm2wa

​Another memorable performance trended worldwide as Seventeen member Wonwoo had a stunning look during the band’s performance “Fear”.

During the intro he hit with a dark vampire look, brought what appeared to be a white rose up to his face and then began to sing, startling the audience by eating the rose.

The band that evening took the “Breakthrough Achievement” award.

Wow #WONWOO and #SEVENTEEN are still on worldwide trends. Now I see why Ww’s hair has to be so unique. Because he got very important roles in this year’s event. 👍🏻👍🏻👍🏻🐋 good job! pic.twitter.com/0FBxpP9nP5

Twice girl group, who won four awards this year on the back of their hit song “Fancy”, the lead single from the group's seventh EP “Fancy You”.

GOT7 boy band amazed the audience with a compilation performance with their title tracks “Eclipse” and “You Calling My Name” from their ninth and tenth mini albums “Spinning Top: Between Security & Insecurity” and “You Call My name”, which were released earlier this year.

How to Become a Meme

A collaboration song between Hwasa, from female band Mamamoo, and J.Y. Park, who is not only a well-known producer and founder of JYP Entertainment but also a successful singer, hit its climax with the woman sitting on the knee of her actual male boss. The performance was so impressive for one of the members of GOT7 - a 'boy band' under the same agency as Mamamoo, JYP Entertaiment -that Jackson Wang's shocked face became a meme shortly after the ceremony.

ONLY THESE 2 CAN ROCK THEM PLASTIC SUITS #MAMAMOO #HWASA #JYP pic.twitter.com/NTFhU5albl

*when dad gets a little too excited*
JACKSON WE GOT YOU.

After the ceremony JYP shared a picture of Jackson on his Instagram, and asked in both Korean and English languages if he did something wrong.

Jackson replied on his own Instagram, mentioning JYP, and  saying that he was just speechless because of the outfit.

MAMA is all over the award every year and this year was no exception. GOT7 fans were outraged by the mistreatment of the band when their performance video was deleted from the Mnet’s YouTube channel,  though Jackson’s meme reaction and their performance continued trending on Korean search website Naver and worldwide.

I can't understand this mistreatment like how can meet delete got 7 performance video?? All other idols videos are there?#mnet

​After the SNS were flooded with angry comments, Mnet re-uploaded the video, a day later than other groups. But fans still demand an apology and explanation from Mnet.

​Even though one of the biggest K-Pop fandoms – EXO-Ls – have  boycotted the ceremony since 2018 for the ceremony’s stance toward their favourite group, MAMA somehow managed to displease EXO fans all over again.

On a video teaser released before the award ceremony organisers put a huge red cross on EXO performing the song titled  ‘MAMA’, the same was as the event; but fans of the boy band and other fandoms was furious that the incident involved a group that did not even attend the show this year.

Im not an exo-l but u don't have to put an ❌ on exo's mama like that especially that song is more relevant that the mnet mama though. The amount of disrespect here pic.twitter.com/jp5yKMrgOn

​The teaser was later deleted from Mnet’s official SNS without any explanation.

The Mnet Asian Music Awards (abbreviated as MAMA) is a major South Korean music awards ceremony presented every year by CJ E&M since 1999.