Twitterstorm Erupts as Filmmaker Suggests ‘Rape Without Violence be Legalised’ 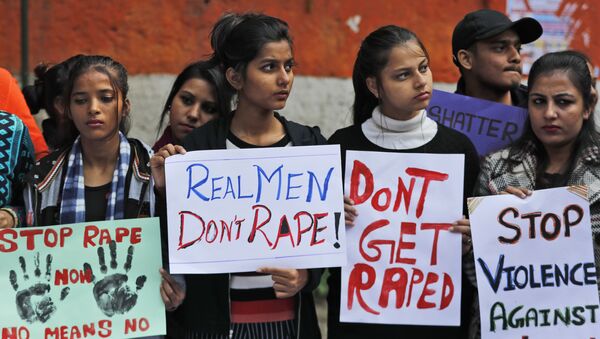 New Delhi (Sputnik): At a time when Indians look united in condemning rapes and murders, such as the gruesome burning alive of a 27-year-old veterinary doctor in Hyderabad, a filmmaker has invited the ire of netizens by suggesting some wild measures for surviving a rape.

Filmmaker Daniel Shravan has suggested that non-violent rape should be legalised in order to prevent rapists from murdering their victims, and that when women are being assaulted by rapists, they should cooperate in the act and not attempt to call the police. He said they are better off offering the rapist a condom in order to avoid getting killed.

Singer Chinmayi Sripaada has shared pictures of the appalling posts made by Shravan on his Facebook page. In one of the posts which has since been removed, Shravan argues that “rape is not a serious thing but murder is inexcusable”.

The filmmaker later said that “society and women's organisations" are to blame for these murders, rather  than the actual culprits. Legalising non-violent rape, he says, is the only way to control these types of brutal deaths, so that the rapists don't  fear being taken to justice and leave their victims alive after rape. In this context, Rape is better than murder.”

“Murder is a sin and a crime. Rape is a corrective punishment. No justice is going to happen with Nirbhaya Act or (name withheld) Act. The agenda of rape is fulfilling the sexual needs of rapists based on that time or mood.”

“Instead of Dialling 100, Carry condoms with You. Save yourself using condom,” he further posted, along with the hashtags #ThePerfectFlirtTips #CarryCondoms #SaveUrLife

The filmmaker, however, later deleted all his posts on Facebook, and posted a new message apologising for his comments.

He backed his comments, saying that the lines were of a villain from his upcoming film and that his audience has misunderstood him.

Whoever this Daniel Shravan is: needs medical help, maybe some heavy duty whacks up his butt, will help him clear his constipated mind.
Infuriating little prick. https://t.co/z8WVpClKTC

Dear Swara, at the end of your rant, I felt you should rise above your Vagina - perhaps
Swara Bhaskar and Daniel Shravan are exactly the same.
Reminds me of this article ⁦@nirwamehta⁩ wrote https://t.co/4aOmx7N3L0

Amidst the gruesome rape & murder cases being reported in d country
filmmaker Daniel Shravan suggests rape victims to cooperate in the act
He says victims to offer condoms so that they are not killed later
Hypocricy at its best
Mr Daniel Shravan,
U need to see a PSYCHIATRIST

Kashmir needs to be liberated from India. This is what we are up against "Filmmaker Daniel Shravan says rape victims should carry condoms and cooperate in rape to avoid their murder afterwards" https://t.co/71rcD9rFmB

Why hasn’t @TelanganaDGP arrested Daniel Shravan yet? That man is a danger to women. His post called for rape as punishment for women. It asks women to cooperate with rapists to avoid getting killed. This sick man shouldn’t be allowed near women and children. #ArrestDanielShravan

Ideas going around.
Some of this content is in Telugu. Basically the ideas these men have given is - cooperate and offer condoms to prevent murder after rape, women’s organizations are the reason for rape.
Rape is not heinous, murder is. pic.twitter.com/2eqhrQA02T

When someone shoves a hard object up your ass, will you say

I will co-operate? #JustAsking https://t.co/iTkx7gZFpm

Recently, the brutal gang-rape and murder of a 27-year-old veterinary doctor in Hyderabad galvanised the country into seeking a sustainable and long-lasting solution to deal with the rising menace of sexual assault in the country.

In a separate incident, a 70-year-old woman from Uttar Pradesh was raped and had to be hospitalised.