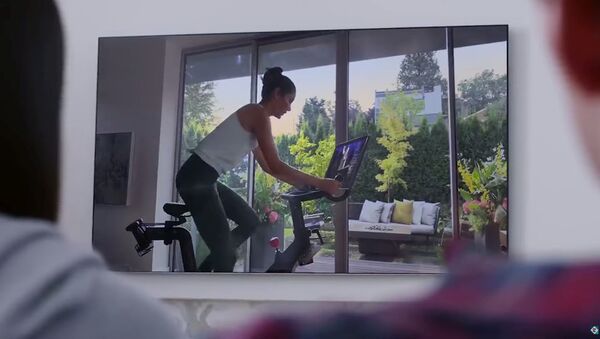 © REUTERS / PELOTON
Subscribe
International
India
Africa
A new Peloton exercise bike advert went viral in recent weeks after it was noted of having sexist undertones as it featured a woman using the device and dutifully thanking her husband for the gift, despite her appearing to not need the exercise.

Writer and comedian Eva Victor trolled Peloton for their 'The Gift That Gives Back' advertisement.

In a 55-second spoof video, Victor pretended to be the 'Peloton girl', who. in the advert, is featured as zealous dedication to the stationary bike her husband bought her for Christmas, but with a personal twist.

The video has been viewed over 3.51 million times since being posted Twitter.

when my husband gets me a Peleton for Christmas ........ pic.twitter.com/Z2d3ewMhPu

​The video has since taken over the internet, seeing thousands of responses.

Users found that the video resonated with them, reflecting their initial feelings after seeing the advert.

Literally had the same reaction to that commercial! Brilliantly done 🤣🤣🤣

I was all excited to get a Peleton as a gift until I learned it wasn't a dog breed.

You are truly a comedic genius.

​Others seemed to believe that the original advert had appealed to them.

Maybe I'm a sociopath, but if I had a husband I would marry him all over again if he got me a Peloton for Christmas.💍

Also yes this is public wish list for:
1. A Peloton
2. A husband

Peloton’s new holiday commercial became an internet sensation in December after being accused of sexism.

The advert was initially released in November, showing a husband surprising his wife with a stationary exercise bike as a Christmas gift.

She is revealed as 'Grace in Boston' and the rest of the clip follows her over time using the device and making video dairies documenting her routine.

The video ends with the women telling here husband:

"A year ago, I didn't realize how much this would change me, thank you".