Bitter-Sweet Goodbye: Gazans Fleeing the Enclave, Fearing for Their Safety 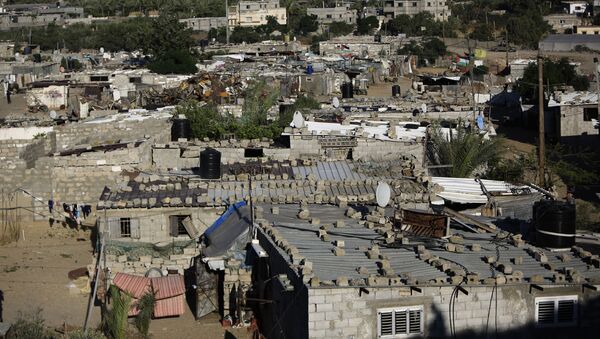 © AFP 2023 / MOHAMMED ABED
Subscribe
International
India
Africa
Despite having a stable income, a good job and a comfortable life, Mohammed Hassan chose to leave Gaza, unable to cope with the never-ending military confrontation between Israel and Hamas, and unwilling to put up with the constant dread for his family.

Mohammed Hassan, a 36-year-old Palestinian from Gaza whose real name cannot be revealed for security reasons, never thought he would need to pack his entire life into two bags - weighing 20 kg in total - and leave Gaza where he was born and raised.

But the constant existential threat and the instability forced him to take his entire family - a wife and three kids - and relocate to a place, where he won't dread for the safety of his loved ones, Turkey.

"Every time there is an escalation between Israel and Hamas [which has controlled the Strip since 2007 - ed.], the Israel Defence Forces explode buildings in Gaza, killing and injuring people. I didn't want to be a number, just another person who was killed during the bombardment," he said referring to the recent round of tensions between Israel and the Palestinian Islamic Jihad that erupted following Israel's targeted killing of the group's high-profile commander.

Amid the confrontation, the Israeli army targeted the group's military infrastructure - that's often located in densely populated neighbourhoods - but ended up killing a family of eight civilians who were buried under the rubble of their home, destroyed by the shelling.

Leaving, however, was not an easy task. Palestinians, who want to relocate and leave Gaza, can do so through either Egypt or Israel, the only two connections of Gaza to the outside world. But getting the permit to cross the border proves difficult, primarily because of a long, complicated and, at times, expensive, for most Gazans, bureaucratic process.

"You need to register your name with the ministry of the interior here in Gaza and wait for your turn, something that might take up to six months," he said over the phone adding that the application could be processed faster if relevant connections are used or if a bribe is given. But in Gaza, where 75 per cent of the population lives in poverty, where the unemployment rate stands at 52 per cent and where an average salary is less than $20 a day, forking out $1000 per application is almost unrealistic for most people.

Mohammed was waiting patiently for his turn and after two failed attempts to leave, he was finally given a positive answer. At the end of November, he crossed the border to Israel - en route to Turkey via Jordan - with the Israeli authorities imposing various restrictions on what he and his family could or could not take with them.

"We couldn't carry a lot of luggage or electronic devices. Laptops, a phone charger and even bottles of water were a no-no," Mohammed recalled, saying that eventually Israelis did let him go but not before they put him through an hour-long interrogation, trying to see if he had any connections to Hamas, considered a terror organisation by Israel, of which he had none.

Not the Only One

Mohammed is one of many who opted to leave. According to Israeli media, some 36 thousand Gazans left the enclave in 2018 alone, with only 17 thousand choosing to return. Most of those who immigrated were young and educated.

Yet, Mohammed doesn't believe official numbers saying the phenomenon is much more widespread. "I believe that between 60 to 80 thousand people have left the Strip [in 2018]. Everyone is trying to get out and look for better job opportunities and a stable future," he explained.

But for Mohammed, who had a stable life and income, a good job in TV production and a comfortable apartment in one of Gaza city's lavish neighbourhoods, leaving was risky, simply because he didn't know what the future held for him.

"My kids have never seen anything apart from Gaza and I wanted to broaden their horizon and give them hope for a better future. I also wanted to protect and isolate them from the reality in Gaza, where they hear shooting and bombardment and see dead and injured. If I fail, I can always go back as I kept my property in Gaza, but, for the sake of my kids, I do hope I succeed," he added.

In Turkey, which hosts some 4 million refugees from impoverished places like Gaza, Syria and Iraq, Mohammed and his family have a one-year residency permit. When time is up and if he doesn't find a job that would grant him a Turkish visa, he will need to leave, either going back to Gaza or looking for another destination, most probably in Europe.