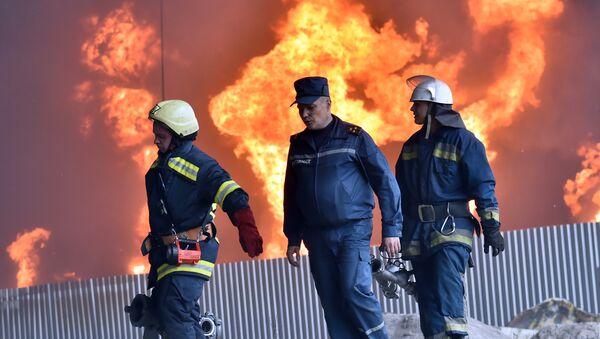 Earlier in the day, the Ukrainian State Emergency Service said that a college in Odessa caught fire, injuring 12 people, with firefighters among them.

One person died as a result of a college fire in the Ukrainian port city of Odessa, while 24 people were injured, the Dumskaya online news portal reported on Wednesday, citing the city's Mayor office.

According to the news portal, the person who died was one of the college's professors. As of now, 24 people, including ten minors and five firefighters are taken to hospitals for medical treatment. The injured are diagnosed with carbon monoxide poisoning and burns.

Firefighters still continue to handle the blaze. The causes of the blaze remain unknown.

The local newspaper Dumskaya previously reported that at least 10 people were injured in a fire in the college building in Odessa.

"Attempts to extinguish the fire are continuing at the Odessa College of Economics, Law and Hotel and Restaurant Business. As of 11.20 the fire area is approximately 1000 square meters, there is a threat of collapse of structures and the spread of fire," said a message posted on the emergency services page on Facebook.

More than 40 people have been evacuated from the burning college building, according to emergency services.

The mayor’s office has postponed a meeting of the executive committee, as the mayor of Odessa Gennady Trukhanov arrived at the scene of the fire. Also, several trolleybus routes are not working due to the fire.