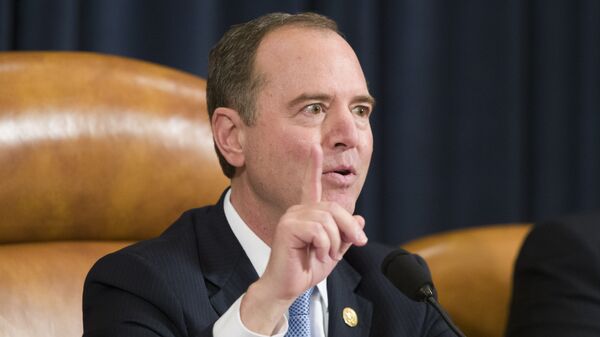 The House Permanent Select Committee on Intelligence report, released Tuesday afternoon, concluded that US President Donald Trump and his administration obstructed justice via witness intimidation, withholding evidentiary documents and other means in order to cover up his attempt "to solicit foreign interference on his behalf in the 2020 [presidential] election."

Following the House Intelligence Committee vote to approve the report headed by Schiff, the document is now expected to be delivered to the chamber’s Judiciary Committee by counsel Daniel S. Goldman.

Prior to the vote, the Trump White House issued a scathing response to both Schiff and the committee’s report.

“At the end of a one-sided sham process, Chairman Schiff and the Democrats utterly failed to produce any evidence of wrongdoing by President Trump,” Press Secretary Stephanie Grisham said in a Tuesday statement. “This report reflects nothing more than their frustrations."

She went on to declare that “Schiff’s report reads like the ramblings of a basement blogger straining to prove something where there is no evidence.”

"The president was willing to sacrifice the national security of the United States ... in order to get what he wanted," Schiff argued at a press conference following the release of his report. "Americans should care deeply that the president is betraying their trust in him."

Reps. Devin Nunes and Jim Jordan, a member and temporary member on the House Intelligence Committee, respectively, released their own "Republican Staff Report" on the impeachment inquiry on Monday. The representatives' 110-page publication contended that the witness testimonies and evidence provided to the House Intelligence Committee thus far do not amount to proof of "bribery, extortion or any high crime or misdemeanor" by the president.