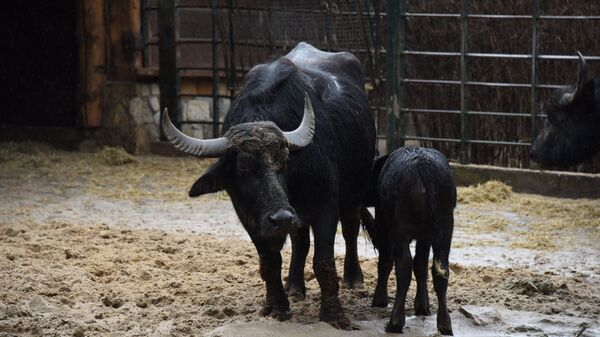 New Delhi (Sputnik): The Gadhimai festival, which is celebrated every five years, is a sacrificial ceremony where about four million people participate in the belief that animal sacrifices to the Hindu goddess Gadhimai will end evil and bring prosperity.

Hindu devotees gathered in southern Nepal on Tuesday to sacrifice thousands of buffalo during the world's biggest ritual animal slaughter in Bariyarpur village in Bara district, 200km from Kathmandu. The festival also involves the ceremonial slaughter of goats, rats, chickens, pigs and pigeons.

Some 200 butchers with sharpened swords and knives butcher the animals inside a walled arena bigger than a football field. Despite huge controversy surrounding the festival and an international outcry to ban the festival from animal activists and the courts, the festival continues to be celebrated.

​Following campaigning by animal welfare societies and activists and a ruling by Nepal's Supreme Court in 2016, the Gadhimai Temple Trust declared in 2015 that animal sacrifice would be banned at future festivals. However, while the temple priest confirmed the ban in a video statement, the temple has since reneged on its promise to have a bloodless Gadhimai.

The origins of Gadhimai date back around 265 years, when the founder of the Gadhimai Temple, Bhagwan Chowdhary, had a dream that the goddess Gadhimai wanted blood in return for freeing him from prison, protecting him from evil and giving him prosperity and power. The goddess asked for a human sacrifice, but Chowdhary successfully offered her an animal instead, and this process has been repeated every five years since then.