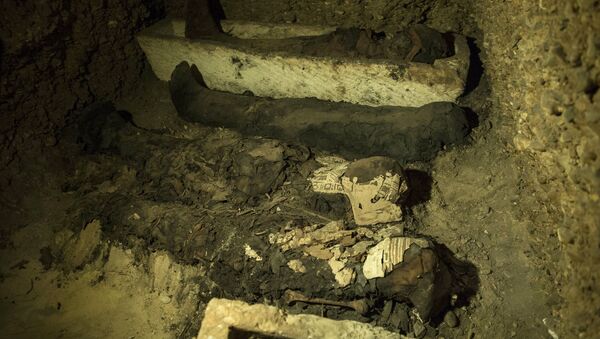 © AP Photo / Roger Anis
Subscribe
International
India
Africa
New technology could shed additional light on historic discoveries unearthed earlier. Researchers can now not only estimate the precise age of the relics but also reveal curious details from the lives of ancient monarchs who lived thousands of years ago.

Archaeologist Anne Austin of the University of Missouri-St. Louis used infrared imagery to help identify tattoos on seven female mummified Egyptians dating as far back as around 1000 B.C. at a site known as Deir el-Medina, Fox News reported.

"When I first saw [the tattoos] with infrared, I felt both the thrill of discovery and the magic of this new technology [...] We were able to identify dozens of tattoos in a previous mummy published in 2017, which showed imagery of religious symbols, floral motifs and important animals like the cows of the goddess Hathor", Austin said.

According to the archaeologist, more recent finds have established tattoos on other mummies, but have not yet detected anything identifiable by symbol and place.

"It's highly likely that with more evidence, we'll find clearer patterns to the location and symbolism of these tattoos, but that will have to wait we've conducted more research", Austin said.

The experts do not currently know why the mummies display the peculiar body markings. Although the identities of these tattooed mummies are reportedly unknown, artisans and craft workers at Deir el-Medina built and decorated royal tombs in the nearby Valley of the Kings and Valley of the Queens.

The US-based researchers were not the first to announce the revealing discovery. Last year, British scientists found figurative tattoos on two ancient Egyptian mummies and made their study public. According to the media report, the world's record oldest figurative tattoos were found on 'Ötzi the Iceman', an approximately 5,300-year-old Neolithic mummy discovered in Italy in 1991.